The Path is Made by Walking

The Poets House Poetry Path in New York’s Battery Park City, an installation of lines of poetry embedded into the urban landscape—on paving stones, railings, flags, and benches—is officially open for visitors! Featuring poetry that traces relationships between people, nature, and city, the path winds through the green space of Rockefeller Park to the waterway of North Cove Marina. We invite the public to explore the path virtually, watch videos of poets reading their featured poems from the path, or visit the path in person.

Traveler, the path is made by walking. 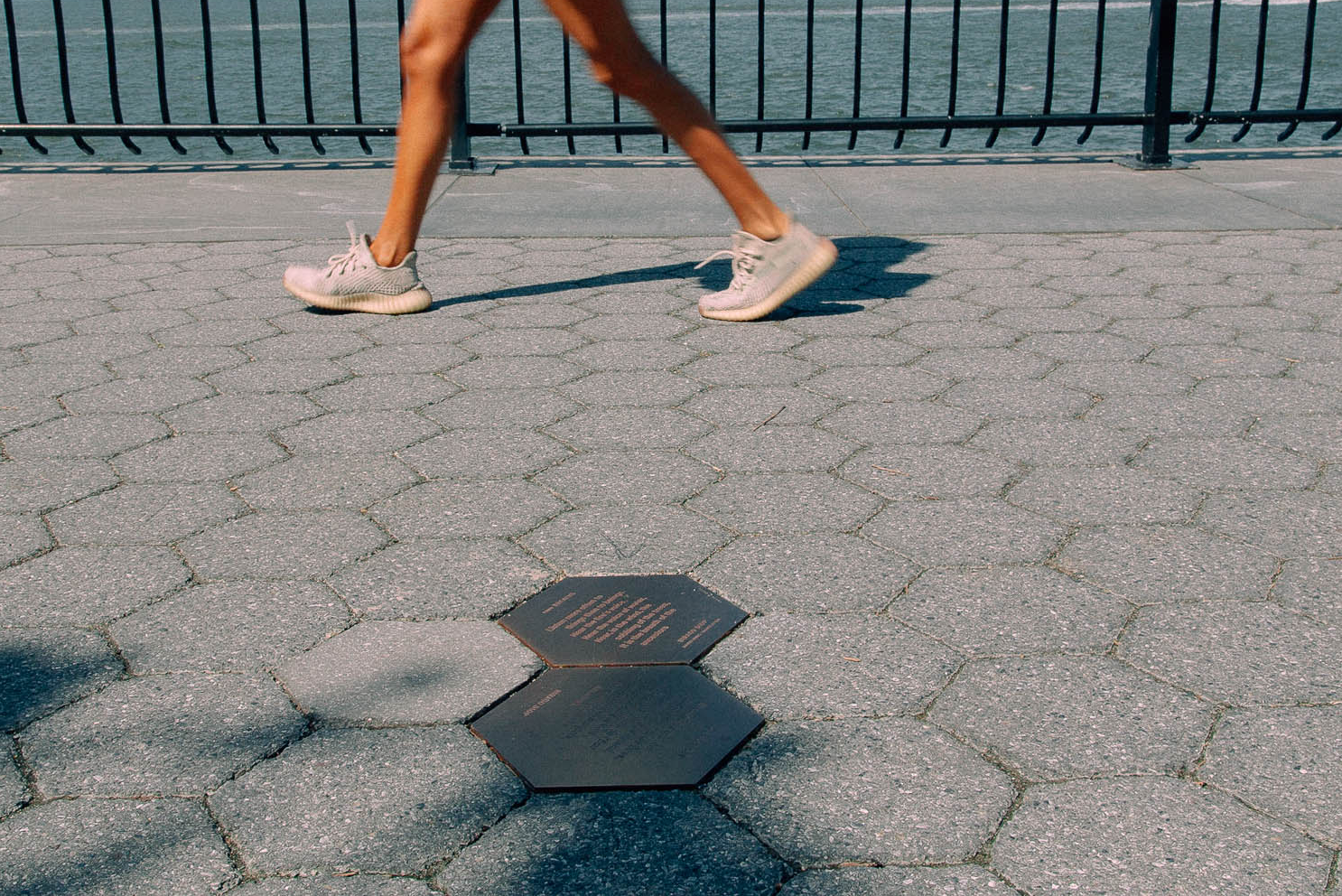 On a cold winter morning, I walked with Abby Ehrlich, Director of Community Partnerships and Public Art for the BPCA, and my Poets House colleagues along Rockefeller Park’s winding paths. Today’s meeting was the culmination of a year and a half of meetings and fundraising that began with a gathering of poets, our friends from BPCA, and Poets House staff, led by Lee Briccetti. Today’s walk marked the beginning of the final stretch of the process, when vision would begin to be made real.

We tossed around ideas for the installation, and Abby pointed out materials comprising the park’s surfaces, imagining ways that the spirit of the page could be adapted to each of them. We asked questions. What ifs.

These poems
they are things that I do
in the dark
reaching for you
whoever you are
and
are you ready?

Wanting to represent the diversity and creativity of New York City, we thought not just about the poets we wanted to feature but the audience, the people who would read these words. What would resonate with them? What could connect the Lower Manhattan locals, for whom Rockefeller Park provides much needed fresh air and sunlight in a crowded corner of the city, with commuters coming from all over the region and tourists from all over the world?

Back at Poets House, we looked for answers in stacks of books. Stacks so tall the shadows cast by them in the morning stretched the length of the Children’s Room, and by late afternoon, they stretched in the other direction. We poured over selections made by the poets in residence in our earlier poetry path projects—so grateful for the wide knowledge and deep love they poured into this work.

Juan Ramón Jiménez, from “Time Give Me the Secret,” photo by Daniel Terna.

One recurring aspect of the work that ended up part of the Poetry Path is the direct address of the reader in the second person, often at a point of epiphany within the poem that implicates the audience, asking us to reflect on the poem’s relevance to their own lives. June Jordan’s “These Poems,” above, is an example. Poems by Jorie Graham and Anne Waldman use this technique to comment on the progress of climate change and global political upheaval.

Poems that use this kind of direct address enact what we hoped the experience of the Poetry Path would create for visitors: a dialogue between poet and pedestrian through space and time. 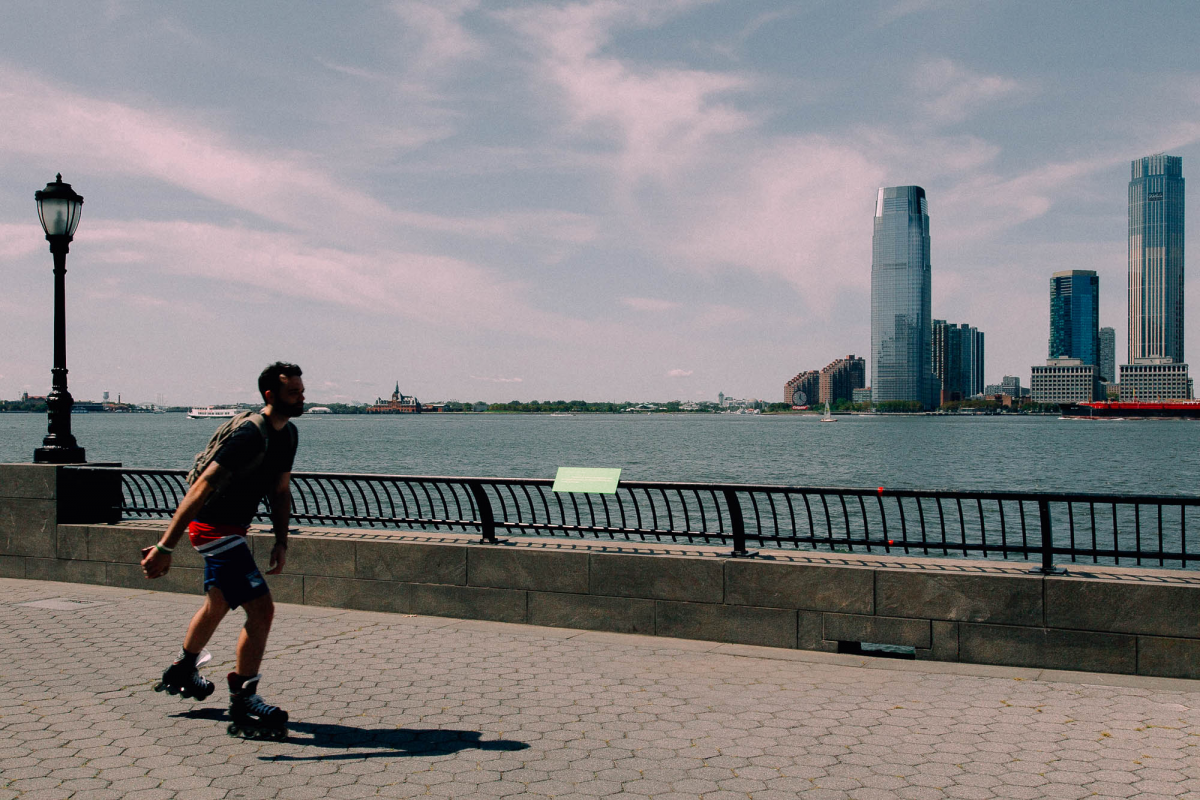 In addressing the city’s people through the Poetry Path, we wanted to communicate something. It wasn’t a discrete statement, so much as a tempo: we wanted to slow down their days, to designate space for contemplation. But we also wanted to respond to the challenges of life in our current moment—threats of climate change, xenophobia, and inequality. We focused on poets celebrating the natural and built environments in which we live and their degradation; we wanted to respond to the injustices of our present moment by mapping them onto the scenery of everyday life.

At one point I put a book down and realized it was my eighth that afternoon. There were still a few hours of daylight left. By the end of the week, we had filled several folders with words that might eventually pave the Poetry Path. The next few weeks would be for whittling them down, sculpting the archive into an arc that could be traversed by foot. 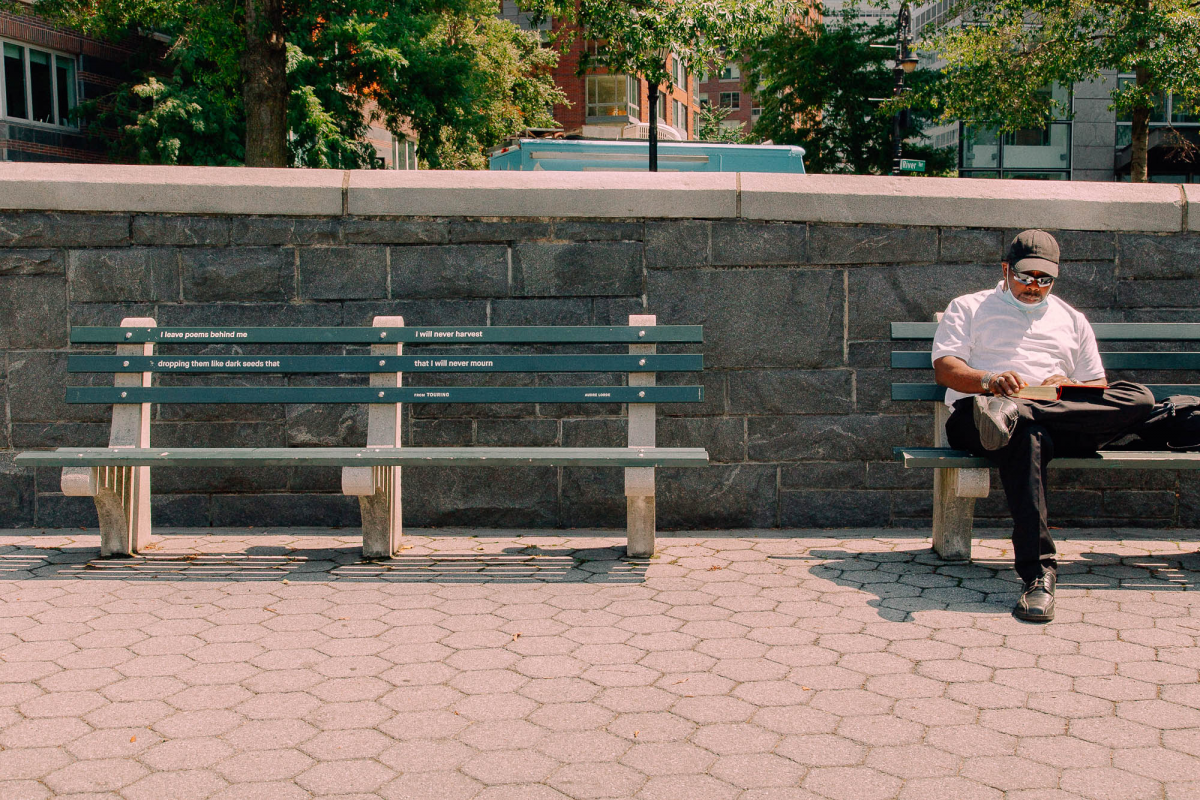 Work by poets from other parts of the world, writing in languages other than English, also surfaced as another important element of the Path. We selected works by Han Shan of the Chinese Tang Dynasty and Sappho of Ancient Greece as well as by modern writers such as Birago Diop of Senegal, and Juan Ramón Jiménez and Federico García Lorca of Spain. 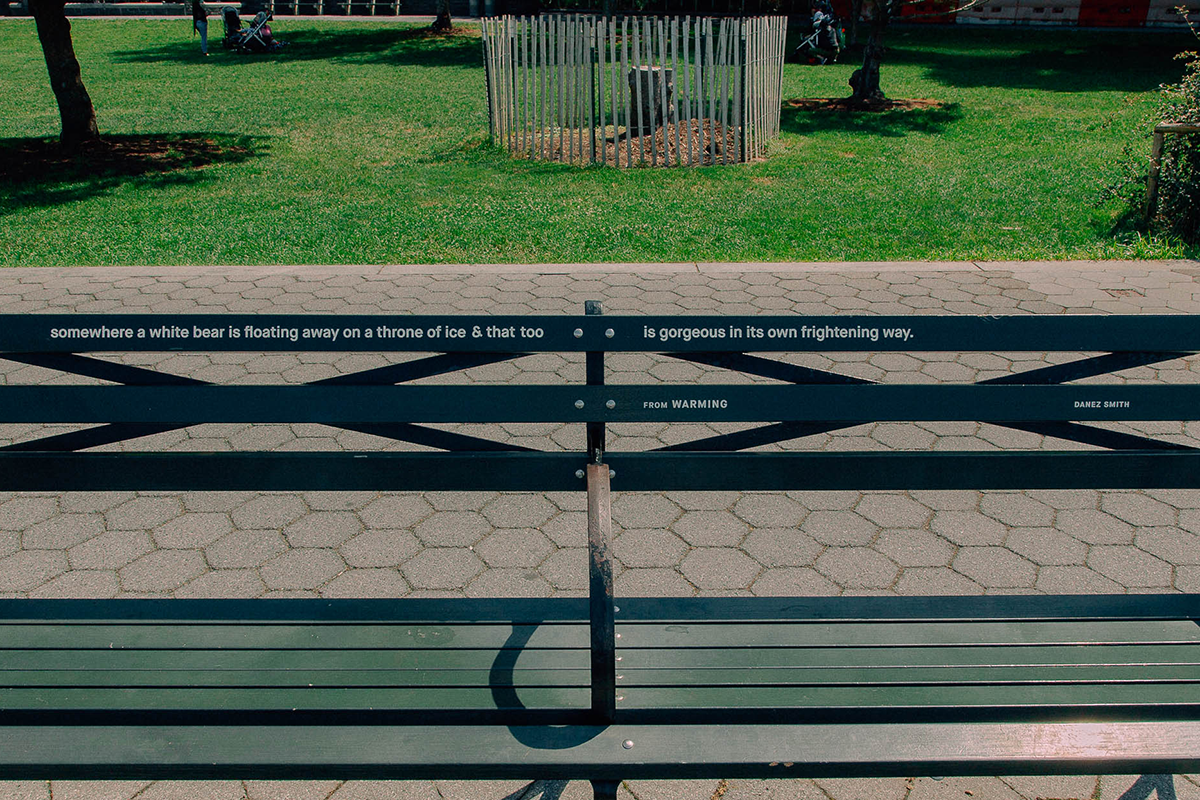 We also selected a wide range of contemporary poets, so that poets exploring today’s concerns would be placed in conversation with past generations. Julian Talamantez Brolaski, Chen Chen, Tommy Pico, Danez Smith, and Jenny Xie are some of the younger voices represented here. And, so as not to exclude the neighborhood’s Tiny Poets, we highlighted two poems written by children through our outreach programs at neighborhood schools.

I too am in love down there with the streets

And the square slabs of pavement—

To talk of the house and the neighborhood and the docks 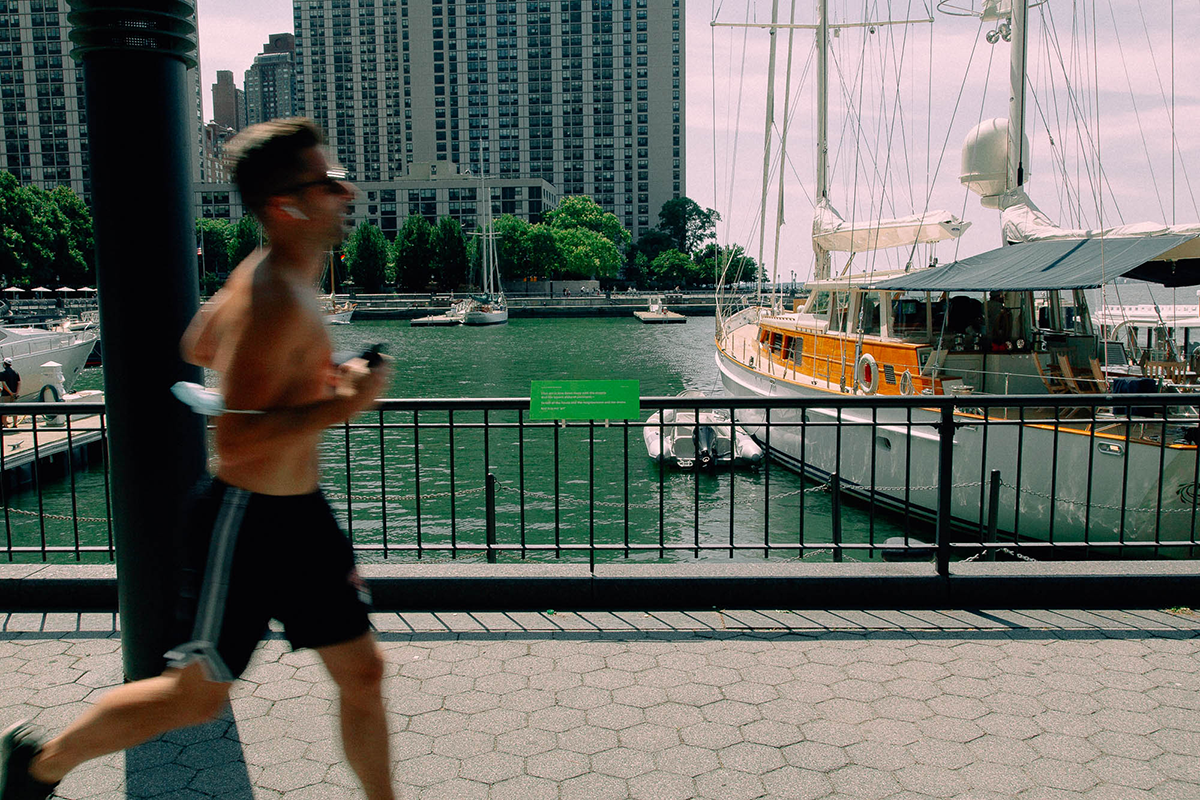 George Oppen, from “Of Being Numerous” Photo by Daniel Terna

When it came time to place the poems, my Poets House coworker Phoebe Kaufman and I spent several days walking through the park with clipboards, packets of poems, maps, and cell phone cameras. Phoebe, having grown up in Lower Manhattan, brought insight into the ways that park-goers used the space—where Stuyvesant high school kids hang out after class (other than Poets House!), where the neighborhood moms congregate with their kids, where families from all over the city come for the annual River to River Festival arts festival—which helped us to conceive of how particular poems might be mapped onto the physical space.

When we found the right fit for a poem, we would jot down the location on each of our packets, then take pictures from different angles to show how passersby would see the poems. It was late spring at this point and raining most days. Often, even on the afternoons when we found conditions favorable for walking, pavements were saturated with rain, benches drenched in condensation. On several afternoons we came back to Poets House slightly damp from leaning against railings and sitting on benches, marked by the same sites we had marked for the installation.

Let’s build the community garden
that never was. Let’s call the neighbors
out, call for an orchard, not a wall.
Trees with arms free, flaming
into apple, peach, pear—every imaginable,
edible fire. 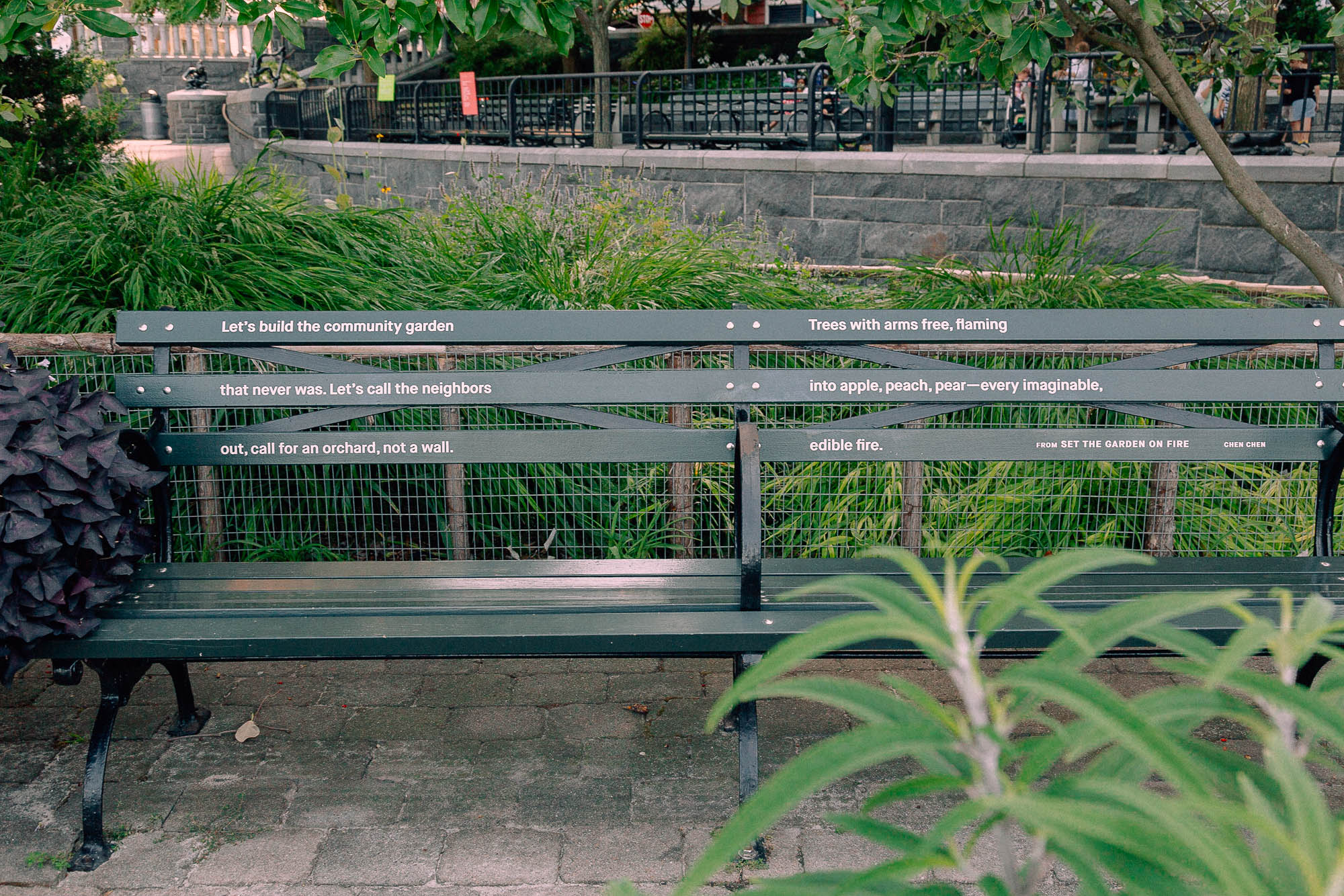 Chen Chen, from “Set the Garden on Fire,” photo by Daniel Terna.

Months were spent on the design of this Path, on every detail from color choice to fabrication method. A design team from Ralph Appelbaum and Associates (RAA) that included poet Evelyn Reilly, Rob Bolesta, Michael Maggio, and Kelsey Mitchell brought their vision and insight into materials, treatments, and installation design principles, helping us to envision transforming pages of text into vibrant, dynamic rail panels, bench slats, and pavers. Battery Park City Authority’s horticulture, park maintenance, and craftspeople applied their knowledge of the spaces and uses of Rockefeller and Teardrop Parks and Belvedere Plaza, ensuring integration with existing natural and built environments.

I’m proud to have been a part of such an incredible team with so many varieties of expertise and ideas that went into the making of this Path. But even more, I’m excited to welcome the public into this collaborative, interactive space, to see what paths and connections they make with the city, the land, and each other through walking. 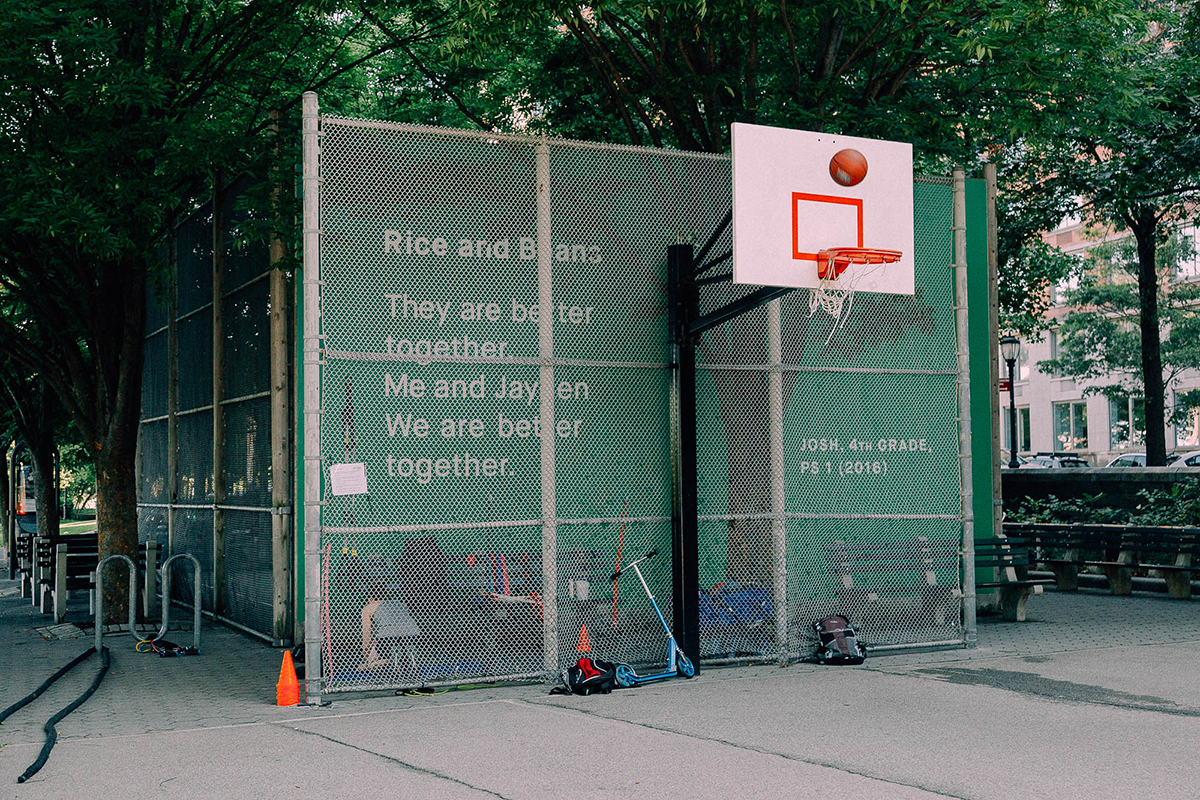 This is the latest in a series of poetry paths that Poets House has developed in collaboration with libraries, museums, parks, and zoos across the country. Its opening celebrates the ten-year anniversary of Poets House’s permanent home at 10 River Terrace. We’re honored by the support of the Battery Park City Authority (BPCA), without whom our home and this path would not be possible and by the faith and support of our other funders.

The Poetry Path is made possible through a partnership with Battery Park City Authority, partners in design and fabrication of the Poetry Path, with additional support from Outreach Partner, Goldman Sachs. Special thanks to the Arthur F. and Alice E. Adams Foundation for funding the Poetry Path planning process, and to the Marcia Brady Tucker Foundation for supporting Poetry Path educational initiatives for youth and children.