Bettissima: An Exhibition of the Life and Letters of Elizabeth Kray

At the end of World War II, in Greenwich Village, poet E. E. Cummings would often meet up with a recent transplant, Elizabeth (Betty) Kray, at 10 p.m. to stroll the city. Perhaps it was on these walks that Cummings came up with his nickname for her—Bettissima—and that Betty came up with a number of her ideas for bringing poetry into conversation with the world—walking tours, poetry readings, literary centers. 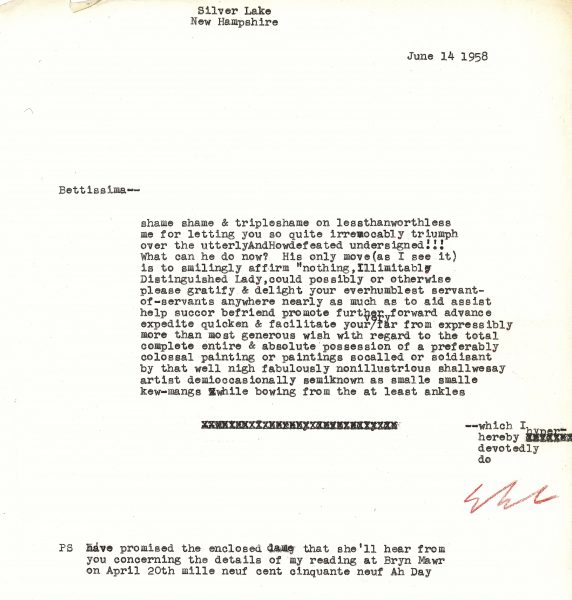 From the 1950s until her death in 1987, Betty Kray was the foremost advocate for poetry and for American poets in the country. She co-founded Poets House with Stanley Kunitz, after a long career through which she shaped the poetic landscape that we see all around us, both in terms of aesthetics as well as programmatic approaches that create access to poetry: the modern poetry reading series in the United States; programs featuring conversations between international poets and translators; poets in the schools; and the concept of the poetry center. On view starting December 11, Poets House presents Bettissima: Treasures from the Elizabeth Kray Archive, an exhibition of Betty Kray’s papers that traces the development of 20th-century poetry and includes Kray’s letters to and from poets—Elizabeth Bishop, E. E. Cummings, T. S. Eliot, June Jordan, Denise Levertov, Clarence Major, and Adrienne Rich, among many other luminaries. 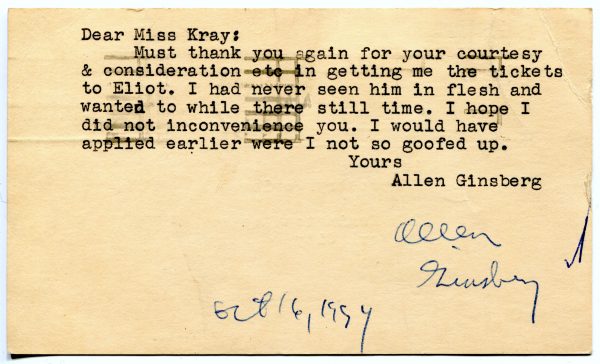 When Denise Levertov praised Betty as the patron saint of poetry, Betty responded by writing that she used poetry ruthlessly for self-charity. She believed that the way “to be” was to live hard and to consider the process itself destiny. Nonetheless, here are some Betty-basics about the life lived, starting with the early years: Born near Cleveland in 1917, Betty attended the University of Washington in Seattle, where she met and married Vladimir Ussachevsky, a Russian émigré and composer of electronic music. In 1944, they moved to New York, and by the 1950s, she was managing the touring careers of Auden, Cummings, the Sitwells, Louise Bogan, and other poets. 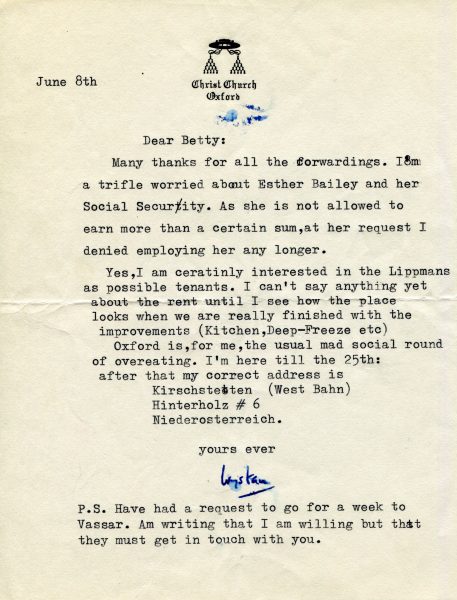 During the latter half of the 20th century, Betty was becoming a behind-the-scenes force in American letters, befriending some of the most acclaimed poets of her day. In 1954, Betty became director of the 92nd Street Y Poetry Center until she resigned in 1963. That same year, she was hired as the first director of the Academy of American Poets, creating the storied reading series at the Guggenheim Museum. In 1966, she started the Poets in the Schools initiative. In 1975, she established the Walt Whitman Award for first books, and in 1976, she created an annual prize for a book of translation. Retiring from her Academy career in 1981, she began organizing meetings of poets to articulate the vision for Poets House—her dream of a place-based immersive environment to nurture the art and its practitioners. 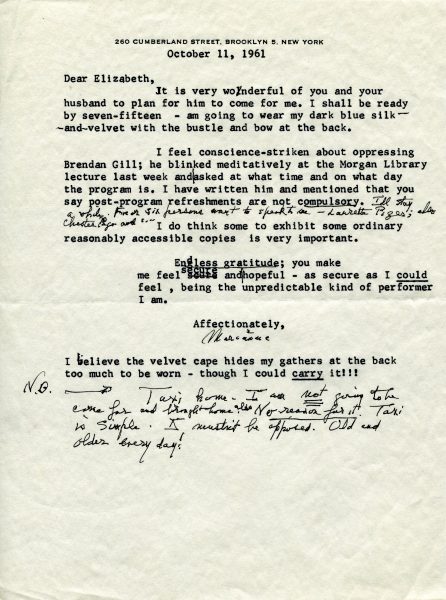 I never met Betty Kray, but I have a strong sense of her as an elegant, brilliant, reserved woman who knew that she was changing the shape of poetry in America. She knew the value of what she was making and she saved file after file of letters from poet correspondents. She put herself into sentences carefully, saving three, four, or five drafts of some of her own letters. 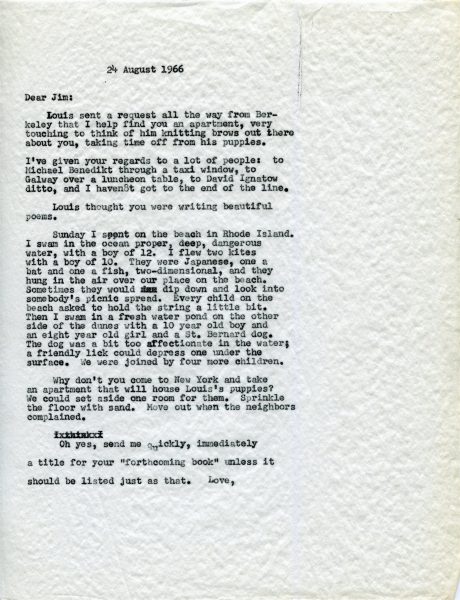 Betty’s letters at Poets House—120 pieces on display from an archive of over a thousand items—reveal a mind inventing new correspondences between the public and poetry. She writes to Auden in 1956, “I’m interested in establishing a professional attitude toward poetry readings. They can be presented as effectively as concerts are.” And she attached a checklist of what needed to happen in order to create an environment of listening and concentration. She had remarkable insight into the social nature (nurture) of poetry readings, as occasions for congregation, support, friendship. Later in her career, she created a model for poets’ national reading circuits that built on this earlier experience. 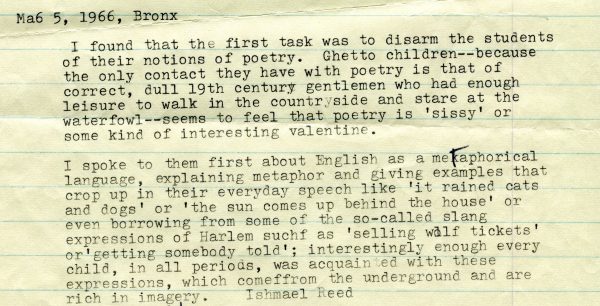 Excerpted draft of Ishmael Reed’s Poets in the Schools Report, 1966

Betty’s letters also reveal the sustenance she provided to—and battles she fought on behalf of—poets. Betty promoted June Jordan, who wrote in 1972: “everything you say about my work helps me to feel like going on.” Angered that Diane Wakowski didn’t get into MacDowell, she plotted with George Oppen to overthrow MacDowell’s fusty ideas. She supported Derek Walcott in his early readings (“I like your letters…I remember your face from Lowell’s party!”). She supported Galway Kinnell and sent him everywhere—that great Irish voice, she says. 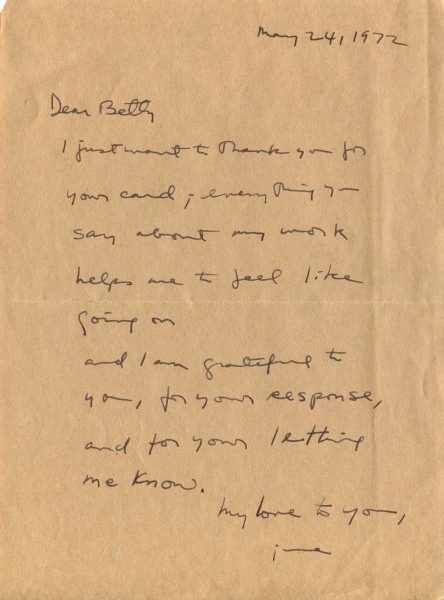 One of my favorite sections of the exhibition has to do with her deep and intimate friendships with women, especially Adrienne Rich, Jean Valentine, and Jane Cooper, as the feminist movement was defining itself. One can chart the development of intimacy through these years of written correspondence as she and her friends stretch to search their thinking together. There are great letters from Rich about beauty, motherhood, women’s lives. Rich writes to Betty in the early 70s: “even our ‘beauty’ is not merely about ourselves but a pawn in the game of nourishing our range of powers….”

Other materials in the exhibition include documentation of the Poets in the Schools program that Betty started in 1966. It was not just a way to expand poetry but (significantly) a way to support young poets. Think about those formative Kenneth Koch books, those holy texts for poets in the schools practice, Rose How Did You Get So Red and Sleeping on the Wing; they would not have existed if Betty had not convinced him to go to into the public schools in the first place. June Jordan, Paul Blackburn, Kathleen Fraser, and Ishmael Reed were among those who participated in an early round of the Poets in the Schools program. Looking back at those early years of the program, Betty wrote: “The arguments used to advocate the effect of poets as awakeners of language in young people have now become accepted and so overused as to sound like clichés. In the early 1960s they sounded like threats of anarchy, disorder, and a call to disobedience to the ears of Board of Education officials.” 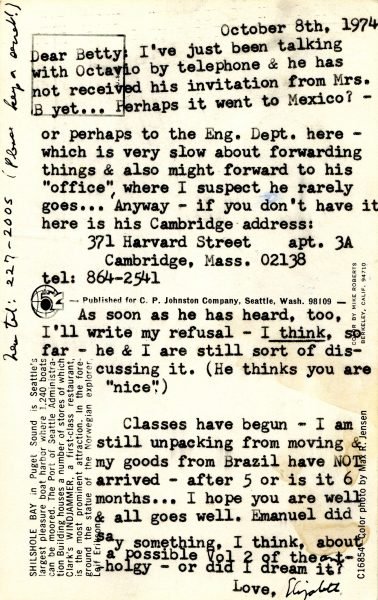 Seeking to broaden her network of poets and expanding audiences for their work, Betty was always asking for suggestions from established poets about who to bring to New York. A reading in New York could exponentially widen a writer’s exposure in the days before desktop publishing and digital media. Michael Harper helped her to bring Sterling Brown and Robert Hayden. Later she brought John Haines from his homesteading life in Alaska. She became ever more interested in younger voices and a more diverse reading list, and she created a survey form for poets from around the country to fill out so that she could widen her aperture. 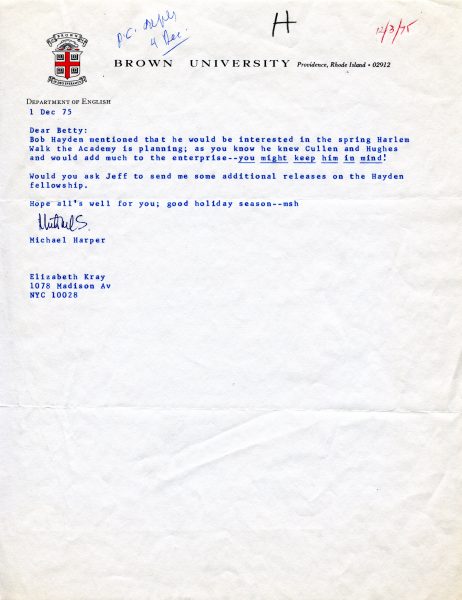 Betty was not satisfied with remaining within the territories of American and British poetry. Throughout her career she cultivated, curated, and commissioned works in translation from all around the world, inestimably opening American letters to the voices of poets from around the world. And she felt that promoting translation was one of her life’s achievements. 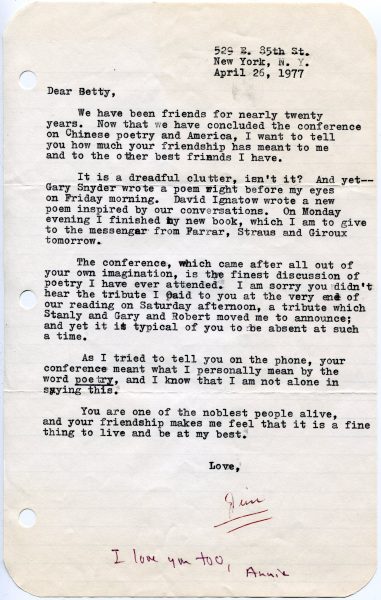 Letter to Elizabeth Kray from James Wright, with handwritten note by his wife Annie Wright, April 26, 1977

Poets House was the final fulfillment of her career and her dream for promoting poetry in the United States. As she was forming Poets House she created a Poets Advisory Committee to help shape programming that was particularly broad and diverse for its time, with wide-ranging representation across communities and aesthetic practice. 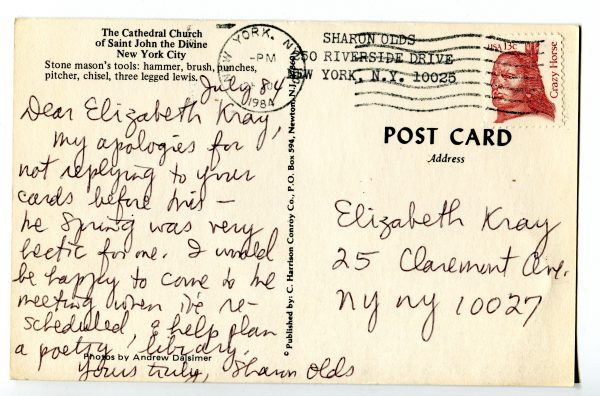 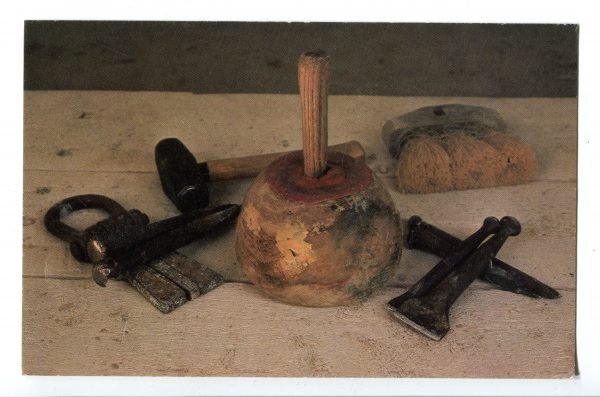 Postcard, back and front, to Elizabeth Kray from Sharon Olds, July 28, 1984

Poets House celebrates Betty annually at our Poetry Walk Across the Brooklyn Bridge, and we give a biennial award in her name for service to poetry. The Poetry Walk pays homage to her interest in “reading” the New York City landscape, that is, creating walking tours that joined literary history, the presence of poetry, and the changing, built environment. Her ingenious tours followed the footsteps of Whitman, Melville, and Poe, and celebrated the centennial of the Brooklyn Bridge. “I like the idea of ordinary people hearing poetry and knowing (momentarily at least) it relates to their lives and feelings,” she wrote. Betty’s sentiment and her example guide us to this day. We are so delighted to invite poets and scholars to learn more about this unsung heroine who built key institutions that became the caretaking presences for poetry in the 20th century, moving into the 21st century. Please visit Bettissima! 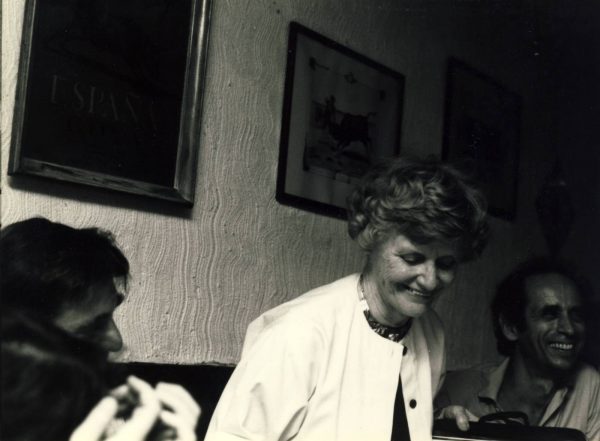