Poets House book report: In honor of Women’s History Month, the Poets House staff pick a few of their favorite poetry books that explore and interrogate gender, history, and power. 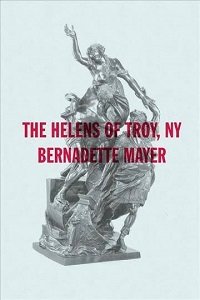 One of my (many) favorite chapbooks in the Poets House collection is Bernadette Mayer’s The Helens of Troy, NY. The chapbook incorporates words and photographs from a project of Mayer’s for which she interviewed each woman named Helen living in Troy, a small city in upstate New York. It’s a pastiche of cultural record and poetry collection, in which Mayer alternates between traditional forms (sestina, villanelle, sonnet) and free verse to document each woman’s memories, evoking a past, glorious Troy with nods to its classical Greek predecessor. Long-closed restaurants and local date spots become familiar through their repetition in the women’s stories, resurrecting lively girlhoods spent in Verdile’s and Proctor’s Theater—like that of Helen Corrigan, who “did a cartwheel / then tap-danced up the wall.” Trojan Helens of many origins and ages populate the pages, all jostling with each other to speak and to wonder, “if you lived somewhere else, would you have a different name?” 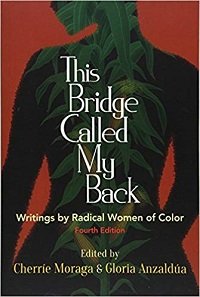 It’s hard to overstate the complexity, vitality, and continuing impact of This Bridge Called My Back: Writings by Radical Women of Color, edited by Cherríe Moraga and Gloria Anzaldúa—a multi-genre definition of feminism by women of color first published in 1981. We read it together this past fall in Laura Henriksen’s 1981 Feminist Reading Group at The Poetry Project, which focused on 1981 and everything we could learn about the unofficial history and unincorporated memory of that single year. 1981’s struggles are still here, but, luckily, so is this book. As Kate Rushin writes in “The Bridge Poem,” “I am sick / Of having to remind you / To breathe / Before you suffocate / Your own fool self.” 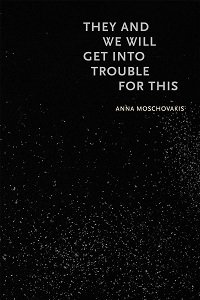 What is a woman if not an entity diagnosed online? Before I read They and We Will Get into Trouble for This, I heard Anna Moschovakis read from and speak about the book. Along with the rest of the room, I was completely captivated by the lyrical flow of the language of this collection, which questions not only rigidity relating to poetic form, but rigidities regarding gender, heredity, illness, and technology. As Moschovakis writes in a poem that stretches along the bottom of her book, “THE ROOM IS VIBRATING.” The writing in They and We creates a delicate yet continually vibrational troubling of boundaries. 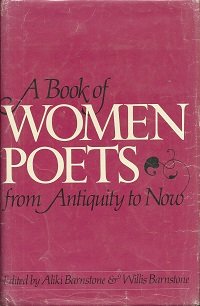 I first encountered A Book of Women Poets from Antiquity to Now as a girl living in rural Vermont. Before my parents gave me a copy of the book, I had been exposed to only a few poets. Besides Emily Dickinson, they all seemed to be named Robert: Robert Frost, Robert Service, Robert Pack. Published in 1980, A Book of Women Poets traverses four thousand years, beginning with poetry from ancient Mesopotamia, and attempts to span the globe, including poetry from India, Iran, China, Russia, Japan, European and African countries, the Americas, Australia, and other parts of the world. While many omissions are apparent in hindsight, this anthology expanded my vision of the world significantly at the time, planted the notion that people who were not men could be important poets, and provided a glimpse of vast poetic histories that I had not previously fathomed and would not come across in my public high school career. Flipping through the pages brings back that period of poetic awakening: “Arrows are in my heart, / the candle is upside down,” writes Iranian poet Forough Farrokhzad (1934–1967). 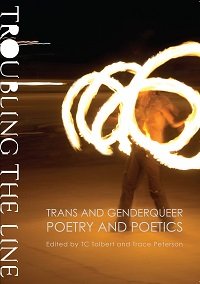 A more recent exciting find is Troubling the Line: Trans and Genderqueer Poetry and Poetics, edited by Trace Peterson and TC Tolbert. This landmark 2013 anthology gathers the aesthetic statements, photos, and poems of 55 diverse trans and genderqueer contemporary voices—bringing to light an inclusive, revolutionary, and expansive vision of identity and poetics. As Peterson, a trans woman poet and critic, writes, “We are not interested in policing identity; we are interested in helping make more widely available in poetry different kinds of inbetweenness in relation to gender identification.” Contributors include such major figures as kari edwards, Dawn Lundy Martin, Eileen Myles, and Joy Ladin, among others. 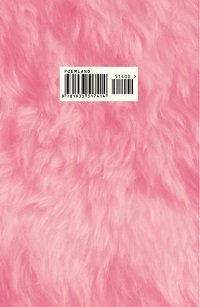 I’ve long loved Chelsey Minnis’ Poemland, an ars poetica dealing in shlocky feminine tropes and the distinctly and pejoratively feminized affects of frivolousness, petulance, ditziness, and excess (among others). It’s a sneering and decadent meditation on poetry, oscillating uneasily between self-indulgence and self-loathing: “If you only have a weak head muscle like I do…” she writes, “then you will understand… / But it is sad to be your own misogynist…” Minnis’ bratty lines accumulate to disconcerting effect, pushing us to consider the cultural, political, and artistic implications of aestheticizing powerlessness in poetry.

Trish Salah’s Lyric Sexology Vol. 1 stages an intervention into both the canon of European and American sexology and the tradition of literature it evolved out of, exemplified by the psychoanalytic case study and by fictional accounts that approach sex change through the lens of body horror. Beginning with the myth of Tiresias, she appropriates these narratives, reframing them through use of the “Lyric I” and rewriting trans embodiment throughout recorded history so that the subjects retain authorial agency in their own stories. Though trans existence was first written into Western canon within these texts, trans bodies and desires were either pathologized or punished; in Lyric Sexology, Salah reclaims these narratives through speculative first-person accounts of the real and fictional lives of Tiresias, Julian Robinson, Daniel Paul Schreber, Stephen Gordon, Lili Elbe, and more. Meanwhile, through weaving autobiographical detail into these stories, Salah creates a performative lineage between these stories and her own experience as a trans woman. This book, by a distinguished professor of gender studies and a singular voice in the growing subfield of trans studies, offers a poetic introduction to the problematic history of trans representation in scientific and psychological literature, or—for a more experienced reader—a more compassionate history of trans desire.