Love is in the air—and in the stacks! Just in time for Valentine’s Day, we explore cover-to-cover lovers from the Poets House Collection: pairs of two books (and sometimes three!) bound together as one. 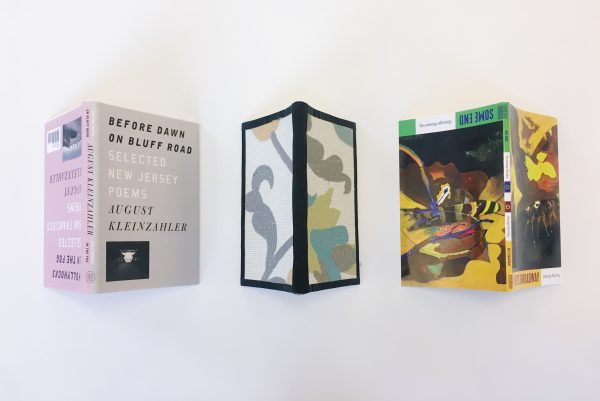 Most books have a beginning, a middle, and an end. But books bound in the tête-bêche style shown above—a term borrowed from French, meaning “head-to-toe”—have two beginnings, plus two ends that meet in the middle. Each cover of the book is a front cover for one of two different texts; in other words, what would ordinarily be the back cover is another front cover. The texts within might be two sections of the same book, two paired books by the same author, or even two totally different books by different authors. To read the different texts, the book must be rotated 180 degrees after one text is read, so the second front cover is no longer upside down. Part of the fun of tête-bêche books is that there are no rules about which cover to open when you pick up the book; every reader gets to decide which half they wish to experience first. 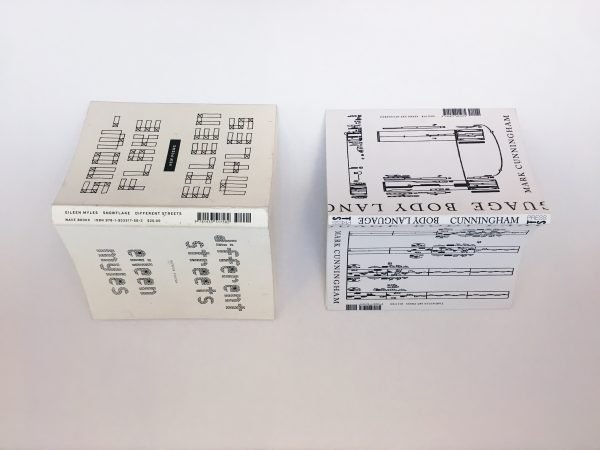 Tête-bêche bindings, made since the 19th century, entered modern popular culture via Ace Doubles, a series published by Ace from the 50s through the 70s that paired two sci-fi, fantasy, or western novellas by different authors together in a single volume. In the mid-century golden age of genre fiction, two exciting stories in one book must have been a compelling sell, and their flashy pulp-style covers (check out a gallery here) wouldn’t have hurt. 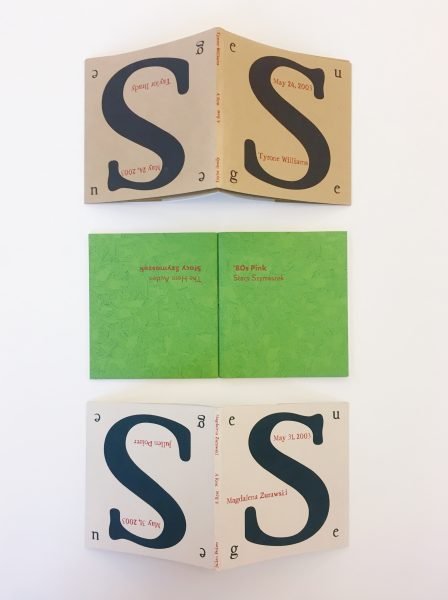 Because of their distinctive look and built-in textual structure, tête-bêche bindings are a not-infrequent choice for handmade artists’ books, as well as for conventional paperbacks and hardcovers. Above, you can see two clever uses. At center, two paired texts by Stacy Szymaszek are combined into a two-signature single volume. At top and bottom, two events in the Segue reading series—one with Taylor Brady and Tyrone Williams, and one with Julien Poirier and Magdalena Zurawski—have been commemorated with books that keep their authors in conversation long after their readings have ended. 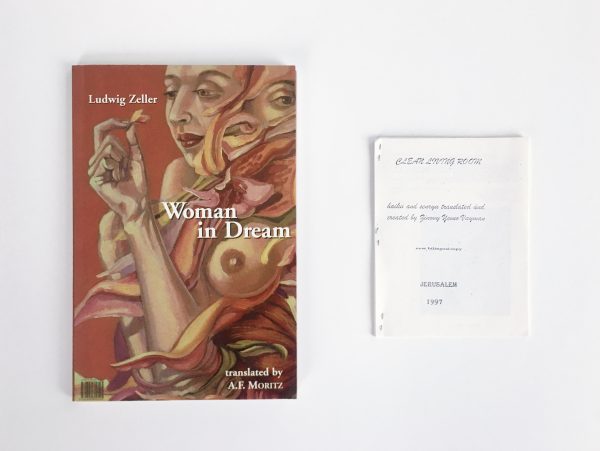 Publishers have also explored another natural fit for the format: bilingual books, which can pair a text in one language with a translation into another language on the other side. Above, we have Woman in Dream, from Ekstasis Editions, and Clean Living Room, a self-published chapbook. Below, Woman in Dream flips to become the French Femme en songe and Clean Living Room is translated into Hebrew. 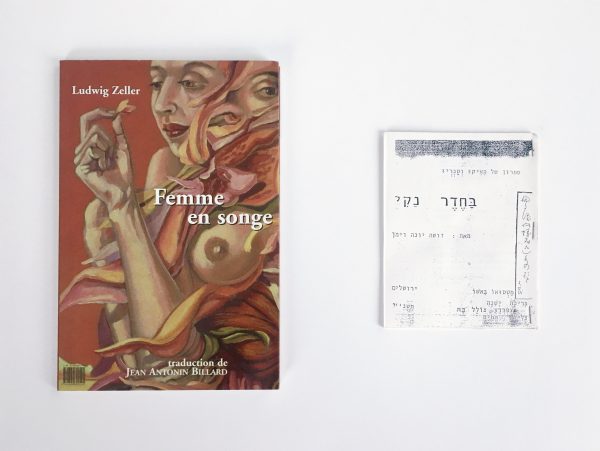 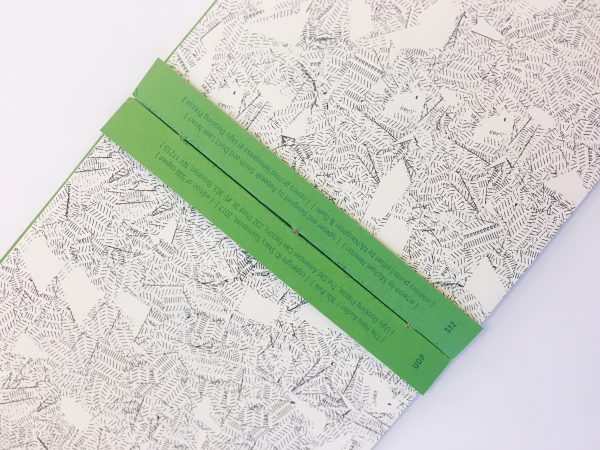 Above, you can see a particularly neat example of what the middle of a tête-bêche book might look like. As promised by the “head-to-toe” meaning, the last page in each half cuddles up to the last page in its partner half. 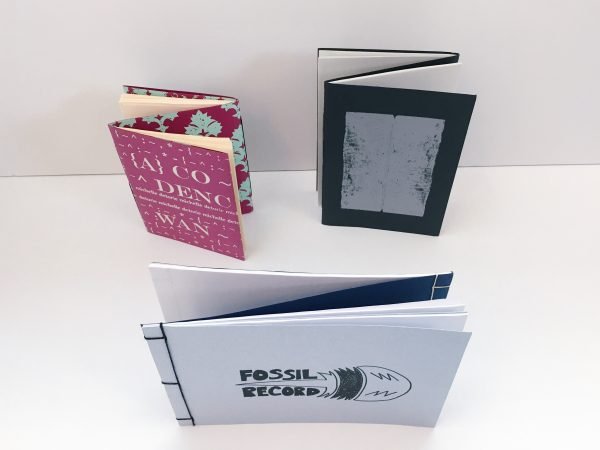 Fortunately for us bookish romantics, tête-bêche bindings aren’t the only way that books can get cozy together. Another binding style, dos-à-dos, also pairs two texts in one item. The difference, as you can see in the examples above from Dos Press, Albion Books, and Flying Guillotine Press, is that the two books share only a back cover, giving them a bit more personal space. Dos-à-dos, meaning “back-to-back,” calls for two spines that are opposite each other, so the two sets of text never quite meet—essentially, a literary long-distance relationship. This style originated in the 16th century and was often used for religious texts, which benefit from being separated in this way for easy reference during church services. 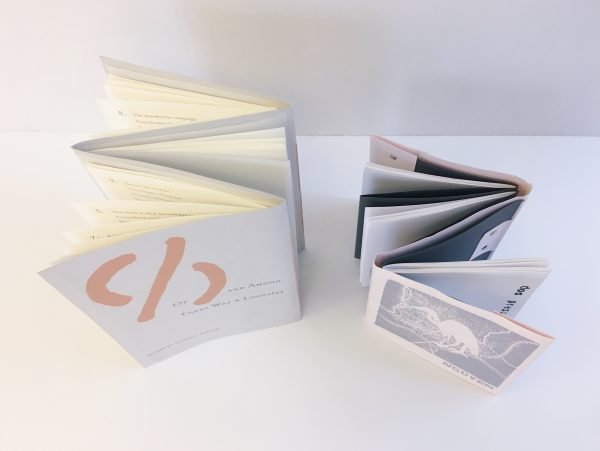 But love is many-splendored, and not all romances come in twos—for some dos-à-dos books, a third partner is what makes the magic happen. At left, Ahsahta Press has produced a book with three sections and three spines, notable for more than its plurality: two sections of the book unfold accordion-style into waterfalls of text. And at right, the well-named Dos Press (tagline: “one book, two spines, three authors”) shows up again, sneaking an extra signature into one of the book’s two sections. Three is impressive, but it’s certainly not the limit—one volume from the 1730s has no fewer than seven separate sections, each with its own spine.

We hope you enjoyed these books that shacked up in our stacks. If you’re feeling inspired, you can make one of your own to add some literary flair to your Valentine’s Day celebration!

Posted In: In the Stacks
Tagged: artists' books, bindings, in the stacks, special collections