Bad News! i was there… by JoAnne Akalaitis 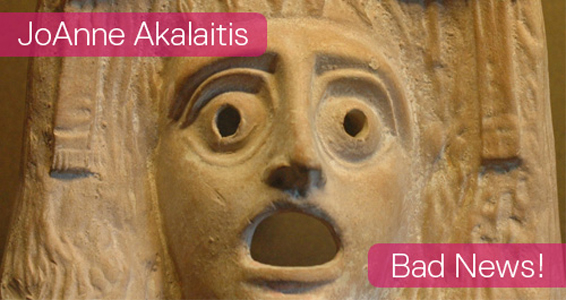 Doors open at 5:00pm
A staged reading comprised of “messenger” speeches from classic plays, ranging from Euripides to Racine, in adaptations by distinguished translators. This new work by JoAnne Akalaitis explores this dramatic device, central to the structure of many great tragedies, invented by the Greeks around 520 B. C. Bad News! will be performed outdoors by a company of seasoned New York actors — Bill Camp, Karen Kandel, Joan MacIntosh, Elizabeth Marvel, Efthalia Papacosta, Rocco Sisto and Nora York — with accompanying music.

Theater director and writer JoAnne Akalaitis is the winner of five Obie Awards for direction and founder of the critically acclaimed Mabou Mines in New York. In addition to the American Repertory Theater—where she directed Endgame and The Balcony—she has staged works by Euripides, Shakespeare, Strindberg, Schiller, Beckett, Genet, Williams, Philip Glass, and her own work at Lincoln Center Theater, New York City Opera, Court Theatre, Opera Theatre of Saint Louis, and the Guthrie Theater. She is the former artistic director of the New York Shakespeare Festival and was artist-in-residence at the Court Theatre. Akalaitis was the Andrew Mellon Co-chair of the Directing Program at Juilliard School, and is the Wallace Benjamin Flint and L. May Hawver Flint Professor Emerita of Theater at Bard College. She is the recipient of a Guggenheim Fellowship, National Endowment for the Arts grants, Edwin Booth Award, and Pew Charitable Trusts National Theatre Artist Residency Program grant.

Sponsored by the River-to-River Festival.