Chapbooks from the Mimeo Revolution: From New American Poetry to New Sentence 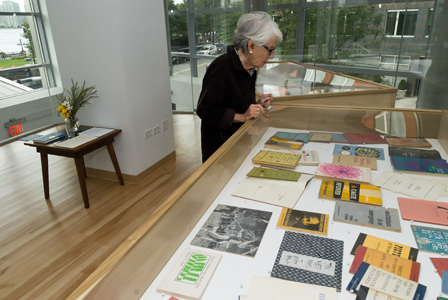 Over the past 25 years, Poets House has amassed the largest open-access collection of rare and out-of-print chapbooks in the United States. These handcrafted folios were the beachhead publication of the “mimeo revolution,” a period stretching from the early 1960s through the mid-1980s, during which a multitude of independent small presses operated throughout North America. At the scattered epicenters of this outbreak of Do-It-Yourself book production were a number of the poets who appeared in Donald Allen’s seminal 1960 anthology, The New American Poetry 1945–1960—such as LeRoi Jones/Amiri Baraka (founder of Totem Press), Lawrence Ferlinghetti (founder of City Lights Books), and Jonathan Williams (founder of The Jargon Society). Over the next two decades, these poet/publishers fueled a collective transformation of the American avant-garde literary landscape.

Highlighting the breadth, depth, and richness of the Poets House collection, the chapbooks featured in this exhibition emphasize the geographical dispersal of these small presses, as well as the multiform concerns of the work they published. By celebrating the chapbook’s networks of artistic kinship and influence, this exhibit also challenges assumptions about cultural production, transmission and inheritance over the latter half of the 20th century.

Exhibition Checklist for Chapbooks from the Mimeo Revolution