“come celebrate with me:” The Work of Lucille Clifton and A Compendium of Creatures 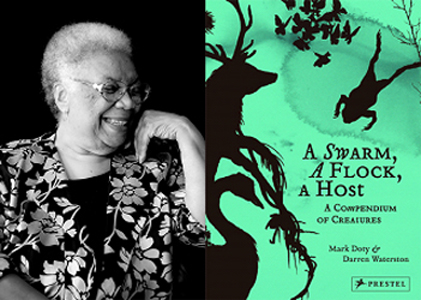 “come celebrate with me:” The Work of Lucille Clifton features poems, drafts and manuscripts, letters, previously unseen photographs, and other materials — from the first poem she ever wrote in the 1950s to her last in 2010 — from Clifton’s archives. Curated by the poet Kevin Young, the materials have been generously loaned to Poets House by the Raymond Danowski Poetry Library at the Manuscripts, Archives, and Rare Book Library at Emory University.

A Compendium of Creatures exhibits the portfolio of A Swarm, A Flock, A Host: A Compendium of Creatures, the new collaboration from noted artist Darren Waterston and award-winning poet Mark Doty. The work is a contemporary version of a medieval bestiary, a literary and illustrative form in which a number of known animal species, as well as mythological creatures, are cataloged encyclopedically. Doty’s inspired poems take the place of traditional moralizing allegories.