(In)verse: Poets Translate Each Other 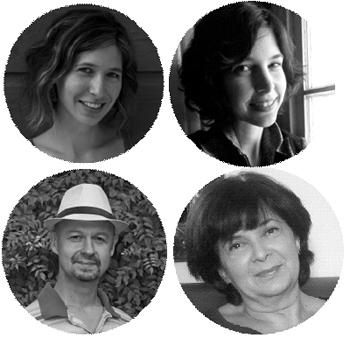 To celebrate National Poetry Month, hear from poets who translate each other’s work. Flávia Rocha and Idra Novey will read in Portuguese and English; and Melcion Mateu and Mary Ann Newman will read in Catalan and English. Both pairs will discuss their creative process and the responsibilities of collaboration and translation.

Idra Novey is the author of the novel Ways to Disappear, a New York Times Editors’ Choice. Her fiction and poetry have been translated into eight languages and she’s written for The Paris Review, the New York Times, and NPR’s All Things Considered. Her most recent translation is Clarice Lispector’s The Passion According to G.H.

Flávia Rocha is a Brazilian poet, editor, and journalist. She is the author of three books of poetry: A Casa Azul ao Meio-dia (2005), Quartos Habitáveis (2011), and Um País (2015), all published in Brazil. She holds an MFA in Writing from Columbia University, and for thirteen years was an editor and then the editor-in-chief for Rattapallax, a literary magazine featuring contemporary American and international poetry. She co-wrote the screenplay of Birds of Neptune, an independent feature film by Steven Richter.

Melcion Mateu is the author of four books of poetry, among them Vida evident, which won the 1998 Octavio Paz Prize, and Illes lligades, which was awarded the 2014 Jocs Florals de Barcelona Prize. Several of the poems from Illes Illigades are featured, along with those of Rowan Ricardo Phillips, in bassist and composer Alexis Cuadrado’s forthcoming CD, Poètica. Mateu has translated into Catalan works by John Ashbery, Siri Hustvedt, and Michael Ondaatje, among others. He holds an MA in comparative literature from Cornell University and a PhD in Spanish and Portuguese from New York University. He is currently a professor at the Univesidade Federal do Paraná in Curitiba, Brazil.

Mary Ann Newman translates from Catalan and Spanish. She has published short stories and a novel by Quim Monzó, non-fiction by Xavier Rubert de Ventós, and poetry by Josep Carner. Her most recent translation is Private Life, a 1932 Catalan classic by Josep Maria de Sagarra (Archipelago Books). In 1998 she was awarded the Creu de Sant Jordi, and she is currently the Executive Director of the Farragut Fund for Catalan Culture in the U.S.

Admission Free and open to the public Location Kray Hall Sponsored By Poets House, Presented in Partnership with Words without Borders

END_OF_DOCUMENT_TOKEN_TO_BE_REPLACED

2016: Idra Novey and Flavia Rocha translate each others poems