Like a Straw Bird It Follows Me: Ghassan Zaqtan & Fady Joudah with Mark Doty 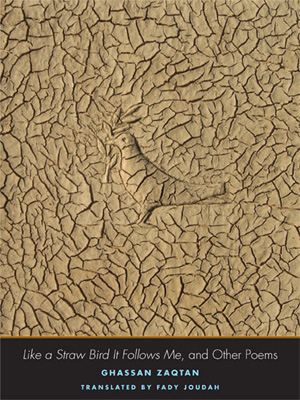 The author of many collections in Arabic, including the newly translated Like a Straw Bird It Follows Me, Palestinian poet Ghassan Zaqtan reads from and discusses his visceral, narrative poetics with fellow poet and translator Fady Joudah.Award-winning poet Mark Doty introduces the pair.

Fady Joudah is a poet and translator of Arabic. His collection Earth in the Attic (2008) won the 2007 Yale Series of Younger Poets competition. He translated Ghassan Zaqtan’s Like a Straw Bird It Follows Me and Other Poems, published by Yale University Press. He also translated two collections of Mahmoud Darwish’s poetry If I Were Another (2009), which won the 2010 PEN USA Literary Award, and The Butterfly’s Burden (2006). He lives in Houston where he is a practicing physician.

Ghassan Zaqtan is a novelist, screenwriter, journalist, and poet. Of his ten collections of Arabic poetry, Like a Straw Bird It Follows Me and Other Poems (2012) is the first translated into English, and is the winner of the 2013 International Griffin Poetry Prize. He is the director of the House of Poetry in Ramallah and the Director General of the Literature and Publishing Department of the Palestinian Ministry of Culture. He is also editor of the literature supplement of the Palestinian daily newspaper al-Ayyam. He lives in Ramallah.

Like a Straw Bird It Follows Me: Ghassan Zaqtan with Fady Joudah

Please note that due to a delay in receiving a visa to travel to the United States, Ghassan Zaqtan will not be able to join us at this event. Fady…