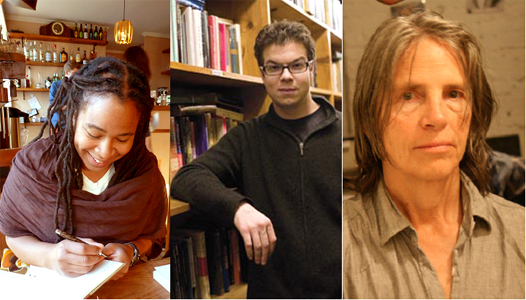 Current Radcliffe fellow Renee Gladman, award-winning Guggenheim fellow Ben Lerner, and New York School legend Eileen Myles, all celebrated writers of both poetry and prose, discuss their experiments with and between forms as well as their work in editing and publishing transgenre works.

Renee Gladman is the author of eight books, most recently, Ana Patova Crosses a Bridge (2013). A new novel, Morelia, and a collection of essay-fictions, Calamites, are forthcoming. Since 2005, she has operated Leon Works, an independent press for experimental prose and other thought-projects including poetry. A fellow at Radcliffe Institute for Advanced Study at Harvard, she lives in Providence.

Ben Lerner is the author of three poetry collections and two novels, 10:04 (2014) and Leaving the Atocha Station (2011), winner of the 2012 Believer Book Award. His book, Angle of Yaw (2006), was a finalist for the National Book Award for Poetry. Other awards include fellowships from the Guggenheim Foundation and the Howard Foundation and The Paris Review‘s Terry Southern Prize. He is professor of English at Brooklyn College.

The author of more than a dozen volumes of poetry, fiction, and non-fiction, Eileen Myles is the recipient of a Guggenheim fellowship, a Warhol/Creative Capital art writer’s grant, and the Shelley Memorial Award, among other honors. Inferno (A Poet’s Novel) (2010) received the Lambda Literary Award for Lesbian Fiction. Her new selected poems, I Must Be Living Twice, will be published this September by Ecco/HarperCollins. She lives in New York.