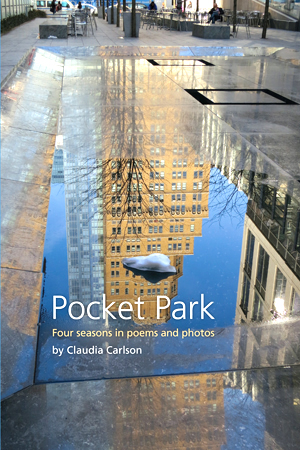 The Launch celebrates:
Joyride by Thomas Fink and Pocket Park by Claudia Carlson

Claudia Carlson’s first book of poetry, The Elephant House, was published by Marsh Hawk Press. She coedited The Poet’s Grimm, an anthology of fairy tale poems, with Jeanne Marie Beaumont. Her poems have appeared in Court Green, Southern Poetry Review, The Cream City Review, Gargoyle, and nycbigcitylit.com, among others. She has been included in the anthologies Love Rise Up (Benu Press), A Circle of Friends:Remembering Madeleine L’Engle, and The Breath of Parted Lips II (CavanKerry Press). She is an award-winning designer specializing in art directing for small presses. She currently works as the Senior Graphic Designer at AFMDA. www.claudiagraphics.com

Thomas Fink is the author of seven previous books of poetry, including Peace Conference (Marsh Hawk Press) and Autopsy Turvy (Meritage Press), as well as four chapbooks, including Former Sestinas, a collaboration with Tom Beckett (Beard of Bees, 2013). His work appears in The Best American Poetry 2007 (Scribner’s). He is also the author of two books of criticism, including A Different Sense of Power (Fairleigh Dickinson University Press). His paintings hang in various collections. Fink is Professor of English at City University of New York—LaGuardia. www.thomasfinkpoetry.net