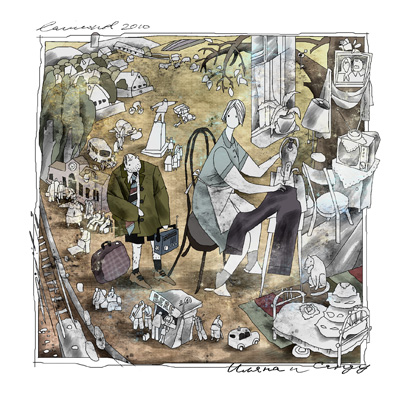 The Russian American Cultural Center presents poetry by Eugene Ostashevsky and fiction by Zarina Zabrisky, in their only New York appearance this year.

Eugene Ostashevsky is a poet and translator who writes about how languages do not match. His last book, The Life and Opinions of DJ Spinoza, was published by Ugly Duckling Presse. His next book, The Pirate Who Does Not Know the Value of Pi, is forthcoming from NYRB Poets. His awards include the DAAD Artists-in-Berlin fellowship, the National Translation Award, the NEA, and the like.

Zarina Zabrisky, a fiction writer and poet based in San Francisco, is the author of three short story collections and the novel We, Monsters. She is the recipient of the 2013 Acker Award for Achievement in The Avant-Garde and the co-founder of the political collective The Arts Resistance. In Zabrisky’s work, “the brutality and urgency of the subject matter is presented in flights of gorgeous prose,” says Guernica.

RACC’s events are made possible in part with public funds from the New York State Council on the Arts, a state agency, New York City Department of Cultural Affairs, in partnership with the city Council, and Tianaderrah Foundation.

This event made possible through the Poets House Literary Partners Space Rental Program.