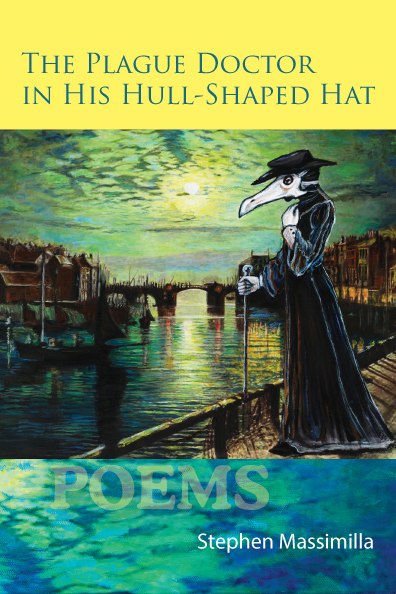 To celebrate the publication of his new collection, The Plague Doctor in His Hull-Shaped Hat, Stephen Massimilla will be joined by Eva Salzman for a reading and discussion about the value of poetry as a vital human pleasure and means of expression.

“As a working poet and educator, I’m concerned about the marginalization of the liberal arts and poetry as crucial areas of study,” says Massimilla. “The title and epigraph of this book in a sense define the role of poetry in an ailing world. We need to realize that poetry can not only improve our ability to understand ourselves and relate to one another but also help us live fuller, more interesting lives.”

Massimilla’s new collection, The Plague Doctor in His Hull-Shaped Hat, is a selection of the Stephen F. Austin State University Press Prize competition. It has been praised by Lucie Brock-Broido and Dean Young, who says, “Stephen Massimilla’s poems remind us exactly what such good poems can do: show us that this world is translucent, that poetic language can open portals with its beauty to the ‘delicious luxuries’ of truth.”

Can Poetry Save Lives? An Evening of Reading and Conversation with Stephen Massimilla and Eva Salzman will take place Wednesday, November 13th at 6pm at Poet’s House, 10 River Terrace, NYC 10282. The event is free and open to the public, and a selection of organic hors d’oeuvres and wine will be served.

ABOUT STEPHEN MASSIMILLA
Stephen Massimilla is a poet, critic, professor, and painter. His new book is a selection of the SFASU Press Prize competition. He has also received the Bordighera Poetry Prize for Forty Floors from Yesterday; the Grolier Prize for Later on Aiaia; the Salmon Run National Poetry Book Award runner-up citation for Almost a Second Thought, selected by X.J. Kennedy; a Van Rensselaer Award, selected by Kenneth Koch; an Academy of American Poets Prize; and multiple Pushcart Prize nominations. Massimilla has recent poems in AGNI, American Literary Review, Barrow Street, Chelsea, The Colorado Review, Denver Quarterly, Provincetown Arts, Quarterly West, The Southern Review, The Spoon River Poetry Review, and Tampa Review; and his work has appeared in hundreds of journals and anthologies. He holds an M.F.A. and Ph.D. from Columbia University and teaches at Columbia University and the New School.

ABOUT EVA SALZMAN
A born and bred New Yorker, Eva Salzman now divides her time between Manhattan, East Quogue, Long Island, and the UK, where she has lived and worked for many years. Her books include Double Crossing: New & Selected Poems (Bloodaxe), One Two II (Wrecking Ball), Bargain with the Watchman (Oxford University Press), The English Earthquake (Bloodaxe), and the widely acclaimed Women’s Work: Modern Women Poets Writing in English (Seren) co-edited with Amy Wack, an anthology which straddles the Atlantic divide as Eva herself does. Her work has appeared in many journals and anthologies, including The New Yorker, The Kenyon Review, The Times, The Times Literary Supplement, The Observer, The Guardian, and Poetry London. Currently she is writing an essay for the British journal Agenda about the hazards of writing libretti, her composer father, and surviving the avant-garde music of her childhood. She holds an M.F.A. from Columbia University and is Associate Tutor at Goldsmiths – University of London.