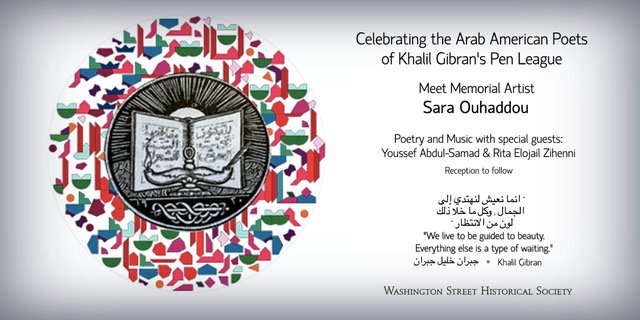 The Washington Street Historical Society (WSHS) is dedicated to preserving and promoting the history, heritage, and literature of the earliest Arabic-speaking community in the United States, established in lower Manhattan in the late 19th century.

After multi-year discussions initiated by the WSHS, the City of New York has agreed to commission public art for a new 2,000-square-meter city park in Manhattan’s lower West Side, commemorating the literary figures who emerged from this first Arab American community, known collectively as the Pen League.

Through a competitive Percent for Art process, NYC’s Department of Cultural Affairs and WSHS partnered to select from over fifty internationally recognized artists the winning design of French-Moroccan artist Sara Ouhaddou.

On the evening of March 8th, Sara Ouhaddou will be presenting the design she has created for the new park. Her vision is of a park filled with the words of the Pen League’s poets and writers. Just as the poets used the vocabulary of the traditional Arabic qasida/ode to create a new form of poetry through free verse, Ouhaddou takes the Arabic alphabet as a base and crosses it with the traditional geometric patterns in Arab art to form a decorative alphabet for quotations from the poets in stone, glass, and tile, to be displayed throughout the park.

We invite you to this public preview of Sara Ouhaddou’s plans and look forward to an open dialogue and Q&A with our community of cultural nomads, intellectuals, artists, writers, and friends. Music, recitations, and reception to follow.

This event is made possible through Poets House’s Literary Partners program. Poets House is an ADA accessible facility.