Nothing Personal: An Afternoon with The Dark Room Collective 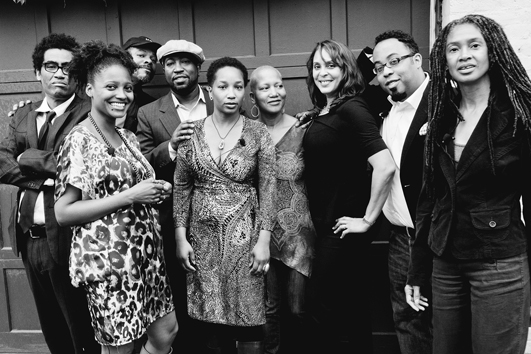 The Dark Room Collective and Dark Room Reading Series were co-founded by Thomas Sayers Ellis and Sharan Strange in 1989 in Cambridge, Massachusetts (after the founders attended James Baldwin’s funeral) as a forum to promote exchange and foster community between emerging and established writers of color. The Collective will celebrate its rich legacy with readings and engage in a lively and moderated discussion about a wide range of literary topics. In the tradition of the Original Dark Room Reading Series, there will be a live performance by NAMAROON, featuring Dark Room co-founder Janice Lowe and special guests.

Tisa Bryant is Critical Studies Faculty and Co-Director for Equity and Diversity at California Institute of the Arts. She is the author of a collection of hybrid essays, Unexplained Presence (2007) and co-editor of War Diaries (2010).

Thomas Sayers Ellis co-founded The Dark Room Collective in 1989. His books of poetry include Skin, Inc. (2010) and The Maverick Room (2004). He is Assistant Professor of Creative Writing at Sarah Lawrence College.

Major Jackson is a poet whose books are Holding Company (2010), Hoops (2006) and Leaving Saturn (2002), which won the Cave Canem Poetry Prize. He is the Richard Dennis Green and Gold Professor at University of Vermont and a core faculty member of the Bennington Writing Seminars.

John Keene is Associate Professor in the Department of African American and African Studies and the Department of English at Rutgers University. His books include Seismosis (2006) and Annotations (1995). His translation of Hilda Hilst’s Letters from a Seducer is forthcoming.

Janice Lowe is a poet, composer and performer. Her works for musical theater include Somewhere in Texas, Lil Budda and Sit-in at the Five & Dime.

Tracy K. Smith is Assistant Professor of Creative Writing in the Lewis Center for the Arts at Princeton University. Her three books of poetry are Life on Mars (2011), which received the Pulitzer Prize, Duende (2007), recipient of the James Laughlin Award, and The Body’s Question (2003) which won the Cave Canem Poetry Prize.

Rochelle Spencer is a poet and educator. She teaches in the English Department of LaGuardia Community College.

Sharan Strange co-founded The Dark Room Collective in 1989. Her first book of poetry, Ash (2001), won the Barnard Women Poets Prize. She teaches in the English Department of Spelman College.

Natasha Trethewey is the current Poet Laureate of the United States. Her books include Thrall (2012) and Native Guard (2006), which won the Pulitzer Prize. She is the Robert W. Woodruff Professor of English and Creative Writing at Emory University, where she directs the Creative Writing Program.