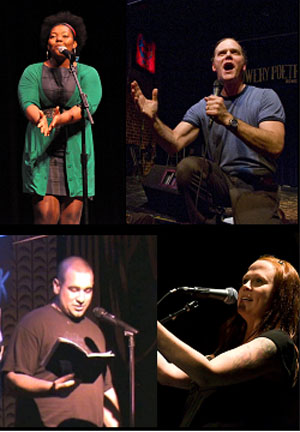 Born in Chicago in the 1980’s and now a worldwide phenomenon, the poetry slam is at the center of a controversy between poetry on the page and poetry in performance. New York City has always been a major player in performance poetry and New York teams have won the National Poetry Slam many times. This program gathers representatives from three of the city’s most prominent poetry slam series for a discussion and demonstration of the poetry slam and what makes a poem not just “come alive” in performance but score well with judges.

Mahogany L. Browne is a poet, performer and workshop leader. Her books of poetry include #Dear Twitter (2010) and Swag (2010). She edited the anthology His Rib: Stories & Essays by Her (2007). A Cave Canem Fellow, she is also the publisher of Penmanship Books.

Taylor Mali is an educator and a poet. His latest book, What Teachers Make (2012), is a motivational account of his experiences with teaching and inspiring students. He is also the author of two books of poetry, The Last Time As We Are (2009) and What Learning Leaves (2002). He is the founder of the poetry series Page Meets Stage.

James Merenda is a poet and playwright. He is a member of the Intangible Collective and an Artist-at-Large for St. Fortune Productions. He coaches and advises slam teams and lives in New York City.

Jeanann Verlee is a poet and performer. Her first book of poetry, Racing Hummingbirds (2010), won an Independent Publisher Book Award. Her work has appeared in a number of journals and anthologies, and she has been a member of numerous performance groups, including Spoken Word Almanac Project and Vortex: Conflict, Power and Choice!