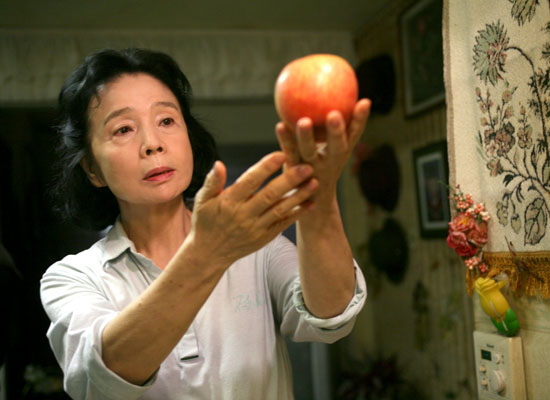 Poets House is delighted to present an advance screening of the new, award-winning Korean film Poetry with an introduction and discussion by film critic Michael Atkinson. A reception to follow.

Advance praise for the film Poetry

Acclaimed Korean director Lee Chang-dong (“a major figure in world cinema” – The New York Times ) follows his award-winning Secret Sunshine with the story of another woman raising a child on her own.

Mija (an extraordinary performance by veteran actress Yun Jung-hee) is a proper, sixty-ish woman struggling to provide for her adolescent grandson. Faced with the discovery of a heinous family crime, she finds strength and purpose upon enrolling in a poetry class — a creative process that allows her to understand and escape her own pain.

Best Screenplay winner at the Cannes International Film Festival and an official selection at the New York, Toronto and Telluride Film Festivals, Poetry is a masterful study of the subtle empowerment of an indefatigable woman.

Michael Atkinson is a former film critic for The Village Voice and has written for The Believer, Spin, Details, LA Weekly, The Boston Phoenix, The Stranger, Interview, and more. He is also the author of five books, and he lectures on film history and screenwriting at C.W. Post/Long Island University and New York University.