Poets of the Non-Existent City: Los Angeles in the McCarthy Era 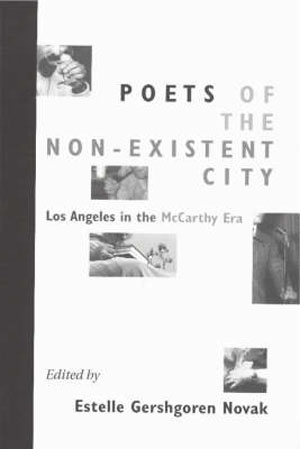 Join us for a panel discussion with editor Tom Viertel, three poets—Gene Frumkin, Estelle Gershgoren Novak, and Mel Weisburd—and scholar Kimberly Bird, as they address the relationship between politics and poetry, with a special focus on the role The California Quarterly and Coastlines played in Los Angeles during the McCarthy years. Naomi Replansky will join the panelists for a poetry reading to close the evening.

Kimberly Bird is a Ph.D. candidate in the department of the History of Consciousness at the University of California, Santa Cruz.
Gene Frumkin, co-founder and poetry editor from 1955 to 1958 of Coastlines, is the author of many collections of poetry, including The Rainbow Walker and The Mystic Writing Pad.
Estelle Gershgoren Novak is the editor of Poets of the Non-Existent City: Los Angeles in the McCarthy Era and the author of two collections of poetry.
Naomi Replansky‘s first book, Ring Song, was nominated for the 1952 National Book Award in poetry; The Dangerous World: New and Selected Poems appeared in 1994.
Tom Viertel, an editor at Coastlines, is an oral historian of Los Angeles’ émigré arts community of the 1940s, which included Bertolt Brecht and Thomas Mann.
Mel Weisburd was co-founder, editor in chief, and managing editor of Coastlines. His articles and poems have appeared in many publications.

An exhibition of archival material relating to The California Quarterly and Coastlines, the leading literary publications of 1950s Los Angeles, representing more than a decade of poetry and graphic arts in the city during the anti-Communist investigations of Senator Joseph McCarthy in Hollywood. Poetry and prose by Allen Ginsberg, Alvaro Cardona-Hine, Charles Bukowski, Edwin Rolfe, Henry Coulette, Kenneth Rexroth, Thomas McGrath, Naomi Replansky, and Don Gordon will be included as well as a sampling of drawings and photographs. This show will present the work of an important, if often overlooked, community in Post-War American poetry.