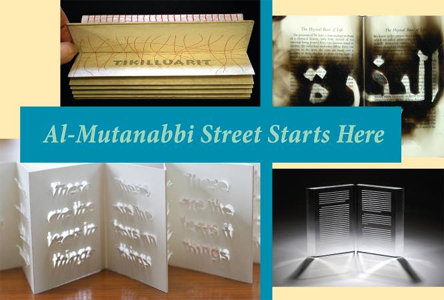 Al-Mutanabbi Street, Baghdad’s literary center since at least the 8th century, was destroyed March 7, 2007 by a car bomb that killed 30 people and injured more than 100. In response to the attack, poet and bookseller Beau Beausoleil created the Al-Mutanabbi Street Coalition, which has evolved over five years to include this international traveling exhibit, co-curated by scholar Sarah Bodman, composed of 260 artists’ books and broadsides responding to the tragedy. A selection of these works is on display in the Cheney Chappell Exhibition Space and on walls throughout Poets House.

Ammiel Alcalay is a poet, translator, and critic. His books of poetry include “neither wit nor gold” (from then) (2011) and from the warring factions (2002). He is the author of several books of non-fiction, including After Jews and Arabs: Remaking Levantine Culture (1993), and the novel, Islanders (2010). He teaches at The Graduate Center, CUNY.

Alise Alousi is a poet whose work appears in Al-Mutanabbi Street Starts Here (2012), We are Iraqis: Aesthetics and Politics in a Time of War(2012), and Inclined to Speak: An Anthology of Contemporary Arab American Poetry(2008). She is Associate Director of InsideOut Literary Arts Project in Detroit, a poetry and writing project for children.

Beau Beausoleil is the founder of the Al-Mutanabbi Street Coalition. He is a poet and bookseller, whose books include Concealed in Language (2003) and Against the Brief Heavens (2000). He is co-editor of the anthology Al-Mutanabbi Street Starts Here (2012). He lives in San Francisco.

M. Lynx Qualey is a Middle East scholar and a writer. She lives in Cairo, where she writes about the Arab and Arabic literary landscape. She blogs at arablit.wordpress.com.

Presented in conjunction with Poetic Voices of the Muslim World, which is funded by the Bridging Cultures Program of the National Endowment for the Humanities, with additional support by the Doris Duke Foundation for Islamic Art.