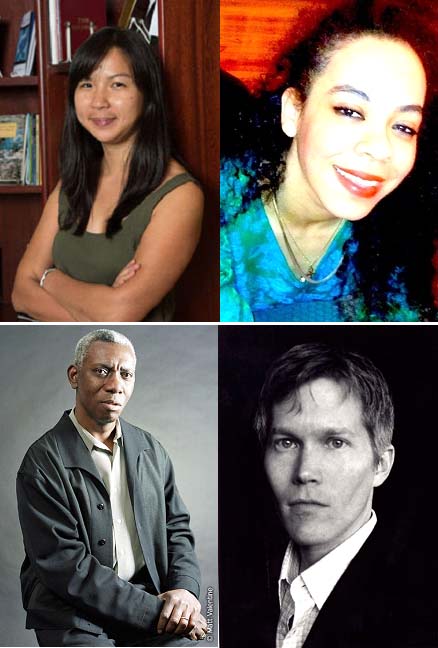 Cathy Linh Che‘s debut collection is Split (Alice James Books, 2014), which won the Kundiman Poetry Prize. She has received awards from The Asian American Literary Review, The Fine Arts Work Center at Provincetown, Lower Manhattan Cultural Council, and Poets & Writers. In 2012, she was selected for The Emerging Poets Fellowship at Poets House. She is a founding editor of Paperbag.

Harmony Holiday is the author of Go Find Your Father / A Famous Blues (Ricochet Editions, 2014), a two-part book of poetry, prose, and letters. Her first book, Negro League Baseball (2011), won the Fence Books Motherwell Prize. She lives and teaches in New York City and Los Angeles.

Yusef Komunyakaa is the author of numerous books of poetry, including his most recent Testimony: A Tribute to Charlie Parker (Wesleyan University Press, 2013). His many awards include the Kingsley Tufts Award and the Pulitzer Prize, both awarded to Neon Vernacular: New & Selected Poems 1977-1989 (1994). He is Global Distinguished Professor of English at New York University.

Mark Wunderlich‘s third book of poetry is The Earth Avails (Graywolf Press, 2014). He is also the author of Voluntary Servitude (2004) and The Anchorage (1999), which received the Lambda Literary Award. He teaches writing and literature at Bennington College, and is a member of the core faculty of the Bennington Writing Seminars.

Part of the Showcase Reading Series, featuring leading and emerging poets with books in this year’s Poets House Showcase.