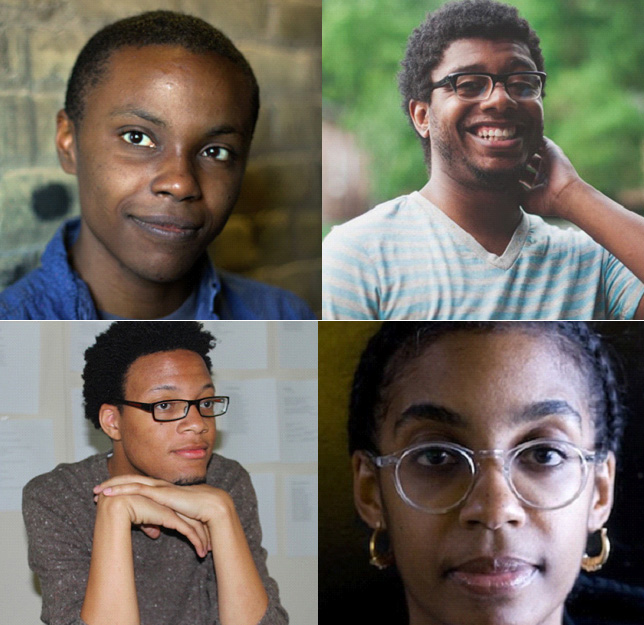 Derrick Austin’s debut poetry collection Trouble the Water was chosen by Mary Szybist for the 2015 A. Poulin Jr Prize. A Cave Canem Fellow, he has also been nominated for the Pushcart Prize. Most recently, he has been awarded the 2016-2017 Ron Wallace Poetry Fellowship at the Wisconsin Institute of Creative Writing. He is the Social Media Coordinator at The Offing.

Cameron Awkward-Rich is a poet and scholar. The recipient of a fellowship from Cave Canem, he is currently a PhD candidate in Modern Thought & Literature at Stanford University. A poetry editor at Muzzle Magazine, he has also performed at multiple national poetry slams. Sympathetic Little Monster (2016) is his first poetry collection.

Rickey Laurentiis is a poet and educator. He has been the recipient of numerous honors, among them a Ruth Lilly Poetry Fellowship and fellowships from the National Endowment for the Arts, Cave Canem, Atlantic Center for the Arts, and the Civitella Ranieri Foundation in Italy. He currently teaches at Columbia University and Sarah Lawrence College. His debut Boy with Thorn (2015) was selected by Terrance Hayes for the 2014 Cave Canem Poetry Prize.

Simone White is the author of two full-length poetry collections, most recently Of Being Dispersed (2016). She has been the recipient of fellowships from Cave Canem and was selected for the New American Poets series for the Poetry Society of America. She holds a JD from Harvard Law School and a PhD in English from CUNY Graduate Center. She is the Program Director at the Poetry Project at St. Mark’s Church.