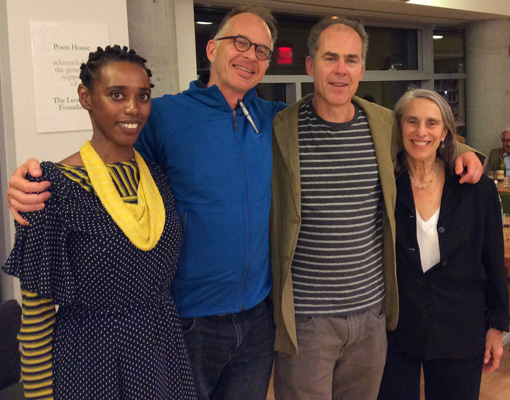 Jeffrey Harrison‘s latest book is Into Daylight, Tupelo Press, 2014), winner of the Dorset Prize. His other books include Incomplete Knowledge (2008), Feeding the Fire (2001), and The Singing Underneath (1988), which was selected for the National Poetry Series. He is the recipient of fellowships from the Guggenheim Foundation and the National Endowment for the Arts. He lives in Massachusetts.

Joan Larkin is the author of six poetry collections, including Blue Hanuman (Hanging Loose Press, 2014); My Body: New and Selected Poems (2007), which received the Audre Lorde Award; and Cold Rive (1997), winner of a Lambda Award for Poetry. She co-founded Out & Out Books and edited several anthologies, including A Woman Like That: Lesbian and Bisexual Writers Tell Their Coming Out Stories (1999). She is Grace Hazard Conkling Writer in Residence at Smith College.

Lenelle Moïse is a poet and a playwright whose first book is Haiti Glass (City Lights Books, 2014). From 2010-2012, she served as the Poet Laureate of Northampton, Massachusetts. Her numerous plays include Merit, Expatriate, The Many Faces of Nia, and Cornered in the Dark. Other awards include a Huntington Theatre Company Playwriting Fellowship and the Astrea Lesbian Writers Award in Poetry.

Spencer Reece is a poet and a priest. His most recent book is The Road to Emmaus (Farrar, Straus and Giroux, 2014). His first book, The Clerk’s Tale (2004), was chosen for the Bakeless Poetry Prize. His many honors include a Witter Bynner fellowship, a Whiting Writers’ Award, a Pushcart Prize, and grants from the Fullbright Foundation and the Minnesota State Arts Council.

Part of the Showcase Reading Series, featuring leading and emerging poets with books in this year’s Poets House Showcase.