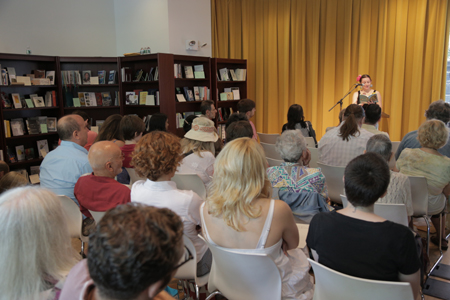 LaTasha N. Nevada Diggs reads from TwERK (Belladonna*, 2013). She has received awards and residencies from Cave Canem, Harvestworks Digital Media Arts Center, Naropa Institute, Caldera Arts, New York Foundation for the Arts, the Eben Demarest Trust and the Barbara Deming Memorial Grant for Women, among others. Her work has been featured at MoMA. Diggs is a Harlem Elohi native.

Cornelius Eady reads from Asking for the Moon (Red Glass Books, 2013) and Book of Hooks Volumes 1 & 2 (Kattywompus Press, 2013). Other publications include The Gathering of My Name, nominated for a Pulitzer Prize, and Brutal Imagination, a National Book Award finalist. He has received fellowships from the Guggenheim Foundation, the National Endowment for the Arts and the Rockefeller Foundation. Eady is cofounder of the nonprofit organization Cave Canem, holds the Miller Chair in Poetry at University of Missouri, and lives in New York City.

Dean Kostos reads from Rivering (Spuyten Duyvil Press, 2012). Other publications include Last Supper of the Senses and, as coeditor, Mama’s Boy: Gay Men Write about Their Mothers, a Lambda Book Award finalist, and, as editor, Pomegranate Seeds: An Anthology of Greek-American Poetry. Kostos has received a Yaddo fellowship, was nominated for a Pushcart Prize, and teaches and lives in New York.

Amy Lawless reads from My Dead (Octopus Books, 2013). Her previous publications include Noctis Licentia and Elephants in Mourning. Her poems have recently been published or are forthcoming in H_NGM_N, Forklift, Ohio, and Zócalo Public Square. She was named a 2011 New York Foundation for the Arts fellow. She teaches creative writing at Rutgers University and lives in Brooklyn.