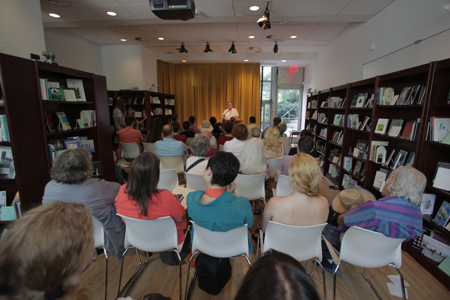 Alex Dimitrov reads from Begging for It (Four Way Books, 2013). Other publications include the e-chapbook American Boys, as well as poems in numerous magazines and journals. Dimitrov is founder and host of NYC’s queer literary salon Wilde Boys and received the 2011 Stanley Kunitz Prize from the American Poetry Review. Currently, he is content editor at the Academy of American Poets and teaches creative writing at Rutgers University.

Karen Garthe reads from The Banjo Clock (University of California Press, 2012). Other recent publications include Frayed Escort, winner of the 2006 Colorado Prize for Poetry. Her work has appeared in FENCE, Columbia Poetry Review, Volt, Painted Bride Quarterly, New American Writing and Chicago Review, among others. She is based in New York City.

Michael Leong reads from Cutting Time with a Knife (Black Square Editions, 2012). Other publications include e.s.p. and I, the Worst of All, a translation of Chilean poet Estela Lamat. His Words on Edge won the 2012 Plan B Press chapbook contest. Leong lives in New York City and teaches creative writing at Rutgers University.

Susan Wheeler reads from Meme (University of Iowa Press, 2012). Other publications include Bag ‘o’ Diamonds, which received the Norma Farber First Book Award from the Poetry Society of America. Wheeler has also received Witter Bynner Prize for Poetry and fellowships from the Guggenheim Foundation and the New York Foundation for the Arts. She currently teaches creative writing at Princeton University and lives in New York.