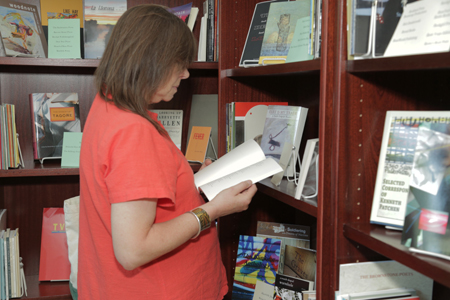 Catherine Barnett reads from The Game of Boxes (Graywolf Press, 2012). Other recent publications include Into Perfect Spheres Such Holes Are Pierced, winner of the Beatrice Hawley Award. She is also a recipient of a Whiting Writer’s Award, a Guggenheim Fellowship, and the Glasgow Prize for Emerging Writers. Poet-in-residence at the Children’s Museum of Manhattan, Barnett teaches and lives in New York City.

Peter Filkins reads from The View We’re Granted (Johns Hopkins University Press, 2012). Other recent publications include Augustine’s Vision and an original translation of Jewish Czech writer H.G. Adler’s Panorama, which was listed as one of the best books of 2011 by The New Republic. Filkins has received numerous awards, residencies at Yaddo, the Millay Colony, the MacDowell Colony, and the James Merrill house, and has taught at Bard College at Simon’s Rock since 1988.

Thomas Glave reads from Among the Bloodpeople: Politics & Flesh (Akashic Books, 2013). Other recent publications include The Torturer’s Wife and, as editor, Our Caribbean: A Gathering of Lesbian and Gay Writing from the Antilles which won a Lambda Literary Award in 2009. A two-time New York Foundation for the Arts fellow, a Fulbright fellow, and a recipient of the O. Henry Award, Glave is Professor of English at SUNY Binghamton.

Rachel Levitsky reads from The Story of My Accident Is Ours (Futurepoem Books, 2013). Other publications include Neighbor, Under the Sun, and DEARLY. In 1999, Levitsky started Belladonna* as a reading series at the Bluestockings Women’s Bookstore and is now a founding member of the feminist avant-garde network Belladonna* Collaborative. She teaches at the Pratt Institute and lives in Brooklyn.