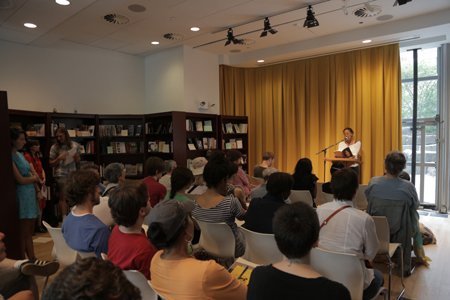 Sarah Arvio reads from night thoughts: 70 dream poems & notes from analysis (Knopf, 2013). Other recent publications include Sono: Cantos and Visits from the Seventh. She is a recipient of the American Academy in Rome Prize, among others, and fellowships from the Guggenheim and Bogliasco foundations. For many years a translator for the United Nations, Arvio now lives in Maryland.

Roger Bonair-Agard reads from Bury My Clothes (Haymarket Books, 2013). Other recent publications include Gully and Tarnish and Masquerade. Cofounder of the louderArts Project, a Cave Canem fellow, and an award-winning slam poet, he works with youth poetry organizations throughout the country and teaches poetry at the Cook County Temporary Juvenile Detention Center. Bonair-Agard lives in Chicago.

Will Schutt reads from his first collection, Westerly (Yale University Press, 2013), which won the 2012 Yale Series of Younger Poets Prize. Schutt is the recipient of fellowships from the James Merrill House and the Stadler Center for Poetry, and his poems have recently appeared in FIELD, Harvard Review, The Kenyon Review Online, and The Southern Review. He lives in Wainscott, New York.

Cecilia Vicuña reads from Spit Temple (Ugly Duckling Presse, 2012), a collection of texts and transcripts from her live poetry performances. Other recent publications include Palabrarmas, I Tu, Tse-tse, and, as coeditor, The Oxford Book of Latin American Poetry. Vicuña’s artwork has been exhibited at MoMA and the Whitney Museum, among others. She currently lives in New York and Chile.