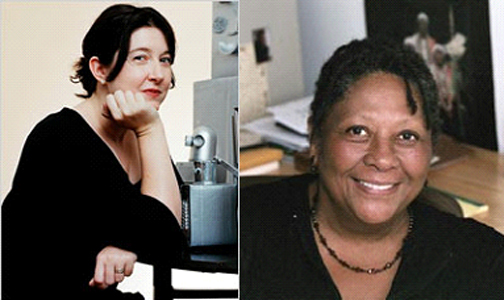 For many people, childhood is the time we are most saturated with poetry, and young adulthood is when we are first compelled to write it. Matthea Harvey and Marilyn Nelson, leading poets and writers for children and young adults respectively, discuss how their poetic practices include and are influenced by their writing for young people.

Matthea Harvey is a poet and visual artist whose most recent book is the multimedia collection, If the Tabloids Are True What Are You? (2014). Her other books of poetry include the illustrated erasure Of Lamb (2011) and Modern Life (2007), winner of the Kingsley Tufts Award. She is the author of two children’s books, Cecil the Pet Glacier (2013) and The Little General and the Giant Snowflake (2009). She teaches poetry at Sarah Lawrence College and lives in Brooklyn.

Marilyn Nelson is the author of numerous books for readers of all ages, including Faster Than Light: New and Selected Poems, 1996-2011 (2012), Ostrich and Lark (2012), Snook Alone (2010) and Carver: A Life in Poems (2010). She is also the author of a memoir-in-verse, How I Discovered Poetry (2014). She is the recipient of two Pushcart Prizes, fellowships from the National Endowment for the Arts and the Guggenheim Foundation, and the 2012 Frost Medal from the Poetry Society of America. She is Professor Emerita at the University of Connecticut and former Connecticut Poet Laureate.