Preface to a Twenty Volume Suicide Note . . . . , Amiri Baraka’s 1961 chapbook, written when he went by the name of LeRoi Jones, can now be read in its original form and entirety on the Poets House website. Published by Baraka’s own Totem Press—which he ran with his first wife, the writer Hettie Jones—in association with Corinth Books, the chapbook features artwork displayed on the front and back covers by Basil King. 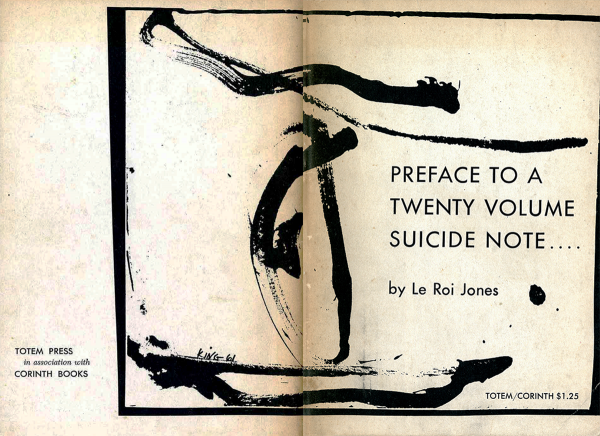 The digitized volume is accompanied by commentary and other materials that contextualizes it within the early days of the Mimeo Revolution and the long trajectory of the work of the radical poet-activist, who was born on October 7, 1934, and passed away on January 9, 2014.

“At the time of publication, Baraka was still LeRoi Jones. . . . a principal member of the post-World War II American poetry avant-garde, which was immortalized in the pages of Donald Allen’s groundbreaking anthology The New American Poetry: 1945-1960,” writes poet and scholar William J. Harris in an introductory essay. “Preface is not just another New American Poetry book, it is also a Black one,” Harris says, situating it as the beginning of Baraka’s “struggle with the hegemony of the white tradition.”

Other accompanying digital materials include an interview with Hettie Jones about the origins of Totem Press (Publisher tab), as well as a reflection on the life and work of Baraka written by poet and Third World Press founder Haki R. Madhubuti (Author tab).

We also present two videos (Audio/Video tab): a 1998 conversation between E. Ethelbert Miller and Amiri Baraka, featuring Baraka reading the title poem “Preface to a Twenty Volume Suicide Note” and talking about his early years as a poet (produced for The Writing Life series of the Howard County Poetry and Literature Society), as well as a video portrait (produced by Christopher Benincasa for New Jersey’s State of the Arts) tracing Baraka’s connections to Newark, including footage of a 1983 interview and one of the last readings of his life in 2013. 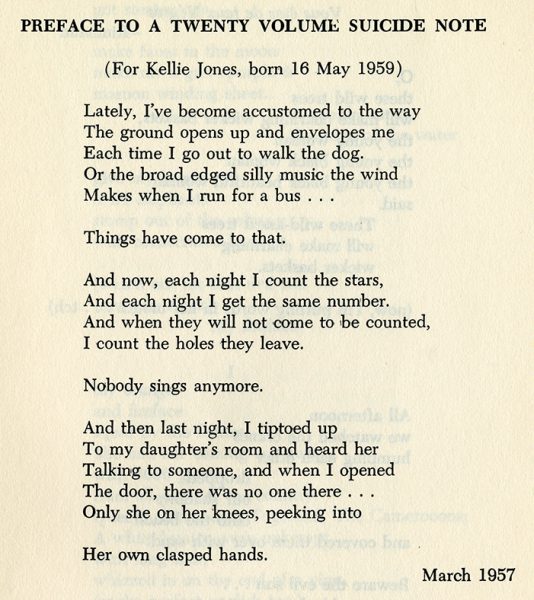 Baraka’s legacy is vast and complex. A ground-breaking poet, playwright, fiction writer, essayist, editor, and activist, he “danced, thought, and created in multiple genres, all in tune with the best and worst of our culture,” writes Madhubuti. This collection provides a vital glimpse into the germinal phase of Baraka’s career, before he wrote the more politically radical, and at times, controversial, work that he became most known for. 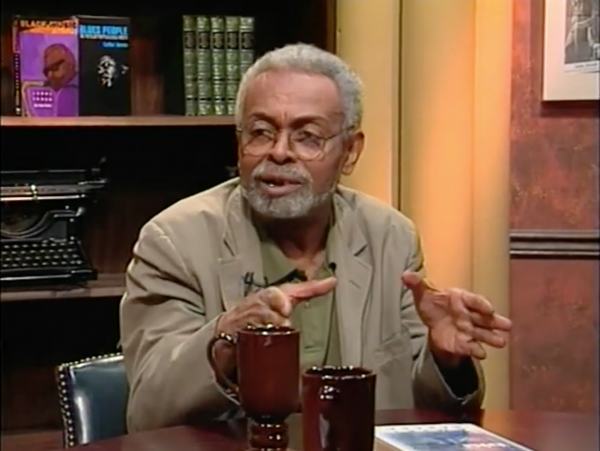 We invite you to flip through the chapbook and discover these contextualizing materials by clicking on the tabs below the digital scan of the collection.

This chapbook is the latest installment in our ongoing series Chapbooks of the Mimeo Revolution, which digitizes works published from the 1960s to the early 1980s.

Preface to a Twenty Volume Suicide Note . . . .  is presented with the permission of Grove Atlantic and the Amiri Baraka Estate. Permission for use of the chapbook’s cover image was granted by the artist, Basil King.