Poets House announces the launch of The Gorky Poems / Poemas a Gorky by Jerome Rothenberg to our website as the third volume in our new digital project Chapbooks of the Mimeo Revolution. Each month, we draw from our library and present digitized versions of chapbooks that were published from the 1960s through the 1980s, when small press publishing exploded across the U.S. during a period now known as the Mimeo Revolution. Each digitized chapbook is accompanied by short essays about the author, the publisher, and the chapbook, as well as multimedia, when available.

The Gorky Poems was published in 1966 by the renowned Mexico City–based literary magazine and book publisher El Corno Emplumado in a bilingual Spanish-English edition. This book demonstrates the global interests and influences of both the poet and his publisher. Founded by American poet Margaret Randall and Mexican poet Sergio Mondragón, El Corno was established out of a desire to foster artistic and literary exchange across cultures and languages, with a particular focus on poets from the Americas, but including those from other parts of the world. Jerome Rothenberg is a poet, translator, writer, and editor of groundbreaking anthologies that have, since the 1960s, gathered global oral poetries together with international avant-garde practices. 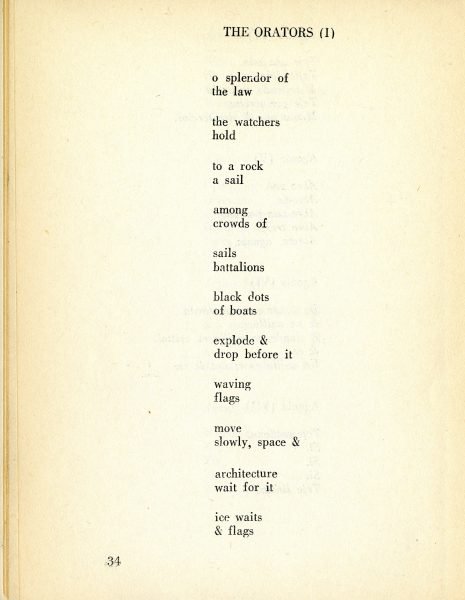 The Gorky Poems grew out of Rothenberg’s fascination with the Armenian-American painter Arshile Gorky, including his “European-ness, with his having come from the other place, as my parents had before me.” The book, Rothenberg’s fourth, demonstrates a transitional moment in his career; two years later, he would publish the first edition of his seminal ethnopoetics anthology Technicians of the Sacred: A Range of Poetries from Africa, America, Asia, Europe, and Oceania.

The digitized volume of The Gorky Poems is accompanied by original multimedia showcasing both Jerome Rothenberg and Margaret Randall. A video filmed at Poets House in 2017 features Rothenberg reading from the book and commenting on the poems, 51 years after their publication in this volume. We also present a multi-part video interview with Margaret Randall, in which she traces her dramatic journey as a young poet to Mexico City, where she met and married Sergio Mondragón. Together, they started a tour-de-force literary magazine and book imprint—publishing the likes of Allen Ginsberg, Ernesto Cardenal, and Herman Hesse, as well as emerging avant-garde writers—until the forced closure of El Corno in 1969 after their support for the Mexican Student Movement. Randall also describes her fight to reclaim her American citizenship when she returned to the U.S. in the 1980s.

The Gorky Poems, like the other volumes in our Chapbooks of the Mimeo Revolution series, is part of Poets House’s 11,000-volume chapbook collection, one of the largest in the country. This digitization project allows us to preserve rare, delicate chapbooks and make them accessible to a wider public. We invite you to explore The Gorky Poems and other related materials!