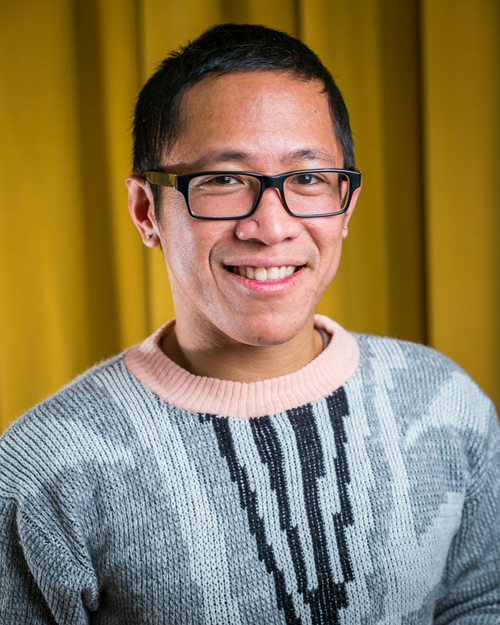 The other night I discovered JEEPNEY on 1st Ave and the yellow light that pulsed at me like a
memory of a PAROL in that cold-ass degree weather told me that this place was a Filipino gastropub.

What the MADAPA KA SA NA is that?

What is a JEEPNEY?

Well, there were these jeeps left over from WWII that were transformed into—

I left Tondo in the front seat of a jeepney. I woke up on my uncle’s shoulder and would not
remember that I had been crying and why until decades later in New York.

SUSMARYOSEP NA MAN, you are so MAARTE!

Inside JEEPNEY was a ghost of a place I once knew.

Wasn’t sure if I belonged.

(Class, today’s words for LOSS are: automobile and traumatic.
Put them together and you get AUTOMATIC.)

There were white people eating my pood, I mean my food.

And every time someone ordered fertilized duck egg, everyone singsong-yelled BALUT!
like how we heard it on our terrace on Morong Street. Some MANONG or MANANG down on the
pavement announcing what they were selling and our mouths watered.

Well I did not have DINUGUAN at JEEPNEY.

Do you remember what DINUGUAN is?

Aldrin Valdez is a painter-poet who grew up in Manila and Long Island. They studied at Pratt Institute and the School of Visual Arts and were a 2011-12 Queer/Art/Mentorship fellow. Together with artists Ted Kerr and Bridget de Gersigny, Aldrin helps organize Foundational Sharing, a series of home-based salons bringing together influences, texts, performances, readings, and installations – produced and enacted by the queer and not, the sensitive, the wise the foolish, the living and the dead.