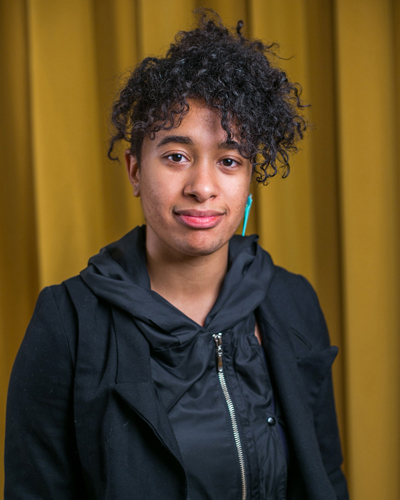 HOW TO KILL A HOUSE CENTIPEDE BY SQUISHING IT BEHIND A PHOTO OF
MIRIAM MAKEBA WHILE CONTEMPLATING VARIOUS ITERATIONS OF RIGOR
MORTIS IN MY GENTRIFIED APARTMENT COMPLEX ON 750 MACDONOUGH
STREET BROOKLYN, NY 11233

Aziza Barnes is blk & alive. Born in Los Angeles, she currently lives in Bedstuy, New York. Her first chapbook, me Aunt Jemima and the nailgun, was the first winner of the Exploding Pinecone Prize and published from Button Poetry. You can find her work in PANK, pluck!, Muzzle, Callaloo, Union Station, and other journals. She is a poetry & non-fiction editor at Kinfolks Quarterly, a Callaloo fellow and graduate from NYU’s Tisch School of the Arts. She is a member of The Dance Cartel & the divine fabrics collective. She loves a good suit & anything to do with Motown.