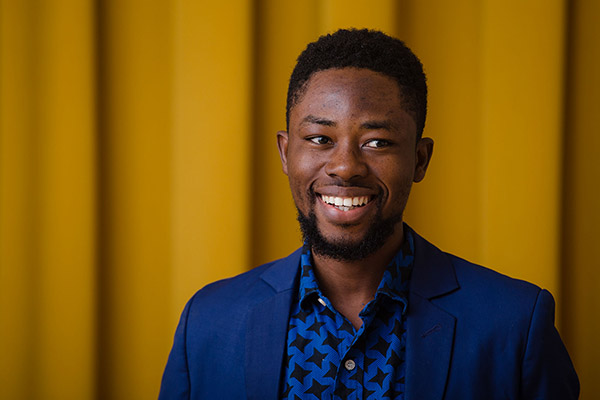 There is an antithesis in this bay of eyes.

I find myself alone in the inner life of this house

But I swear we could be four hundred.

I’m trying to listen to what love my skin might be saying to me.

There is a sprawl inside my chest. I want you to come inside.

At a party, I watched a lady slice through air like fish in the unsolid

Love of water. I thought of her. How she moves and moves her ache with her.

Later she tells me of the hole her mother gave her as a gift.

What do parents pass on to their kids if not all of their wounds?

Mine wrapped their scars in shawls, said here, here, all of our hearts

But this stereo knows a thing or two about plurality. The dark science of it.

Isn’t that Coltrane? There is a man dying inside his voice tonight. I’m all sighs

Now. O lord, I’m all sighs now. Why do my legs move like a definition missing

From a book of itself? I am my Father when I’m dancing.

Gbenga Adesina, Nigerian born poet and essayist, jointly won the 2016 Brunel African Poetry Prize. His poem, “How To Paint A Girl” was selected by Mathew Zapruder for its “clarity of observation and empathetic insight into the suffering of another” for the New York Times. He was a 2016 Norman Mailer Poetry Fellow at Pepperdine University, Malibu, California. He has received scholarships and residencies from Fine Arts Work Centre, Provincetown and The Open Society Foundation in Goree Island, off the coast of Senegal. His poetry chapbook, Painter of Water was published by APBF and Akashic Books, New York in a series edited by Kwame Dawes and Chris Abani. His poems have appeared or forthcoming in Prairie Schooner, Brittle Paper, Vinyl, Ploughshares and elsewhere. His poetry manuscript, Holy Bodies was a finalist for the 2017 Sillerman First Book Prize.