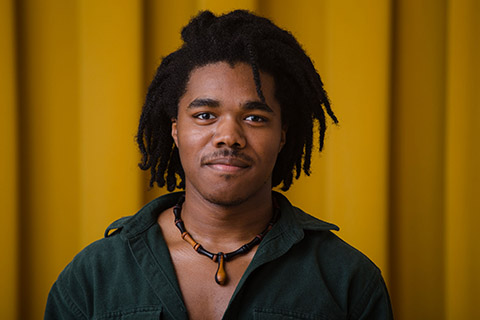 On the weekends, I recalled, with you, the story of two brothers
driven into the power that meant to destroy them. In your room
we played like children, mind-deep in the fables of what blood
really means when context revises. It’s history that divides,

as does blood, this reddened animal of despair rummaging through
the wide roads inside us like a village. We discussed the Uchiha
clan, marvels of the gifted warrior, the clan bound and unbounded,
blessed with the imitative and native aesthetic, eyes that sees

through the machine of process, but mostly, we discussed Itachi,
the genius who slaughtered his entire clan save for his brother,
who no longer saw him as a brother but a body with shared blood.
I have yet to know where the line lies between family and familiarity.

We almost wished to be the two brothers, the last ends of a nation,
and I can only think that we wanted to be the last of something,
an ode to the history that trailed blackness as children were made.
I imagine I eye my own people and saw how my faith in a painless

life for my kind grows thin like a branch reaching farther into the sky.
There are days we believe the only solution to death is death. The past
is a live animal that crawls back into our eyes unveiling a new history,
how the world bleeds without us, how we bleed while alive within it.

I think of the blade in Itachi’s hand as he leaves the village with nothing
but the blood of two brothers running through them. I thought of how
he stared into his younger brother’s eyes like I stare into yours
with a wondering of the moralities of death. The younger brother sees,

as we have seen; a clan destroyed by its own kind, but when the days
pass through, we wonder that if our people should die, would we rather
it be by our own hand and become a lineage stunted by a vital sacrifice.

Yes, my friend, we’ve seen how history occurs upon us like a blade
and I know we have demons waiting to recur and recur.

Nkosi Nkululeko, a Callaloo Fellow, has been nominated for Best of the Net, the Independent Best American Poetry and the Pushcart Prize. Nkosi was a featured speaker on TEDxNewYork and is a finalist for the 2016 Winter Tangerine Awards for Poetry. His work is published or forthcoming in [PANK] Magazine, Third Coast, VINYL, No Token, and other publications. He lives in Harlem, New York.