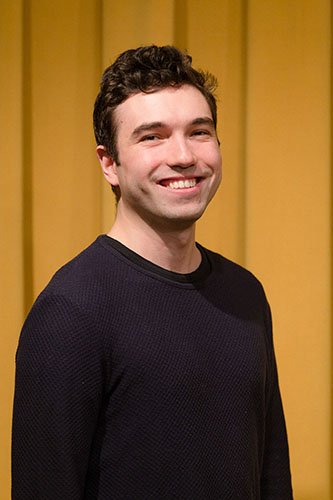 one hits upon the necessary words, which matter
so little or the right amount.

Looking for love, or is it
a singer’s pride
behind sunglasses: in parks, dark alleys
or beatings / breathing, which long
for the same
still body temperature.

In a beautiful old kitchen knife
while slicing open the mildewed
bread, in a song
in the public bathroom
of the Third World, where you’ve landed
out of desperation.

In the bedroom.
These are not
the right places for love, right?

Look at that scrawny David
with the buzz cut
and five tattoos on his arms and legs
like Scripture over the sun’s
mind-cold limbs.

The one who’s spinning
after a crash that will leave her
intact, with a long mark that skids
down her abdomen
you will never stop
kissing

to look at, but look.

Sébastien Bernard is a poet and writer of fiction. He completed his MFA at The New School with the Prize of Excellence in Poetry, and his BA in Philosophy at Vassar College. His poems have appeared in Public Pool and Queen Mob’s Teahouse, and an excerpt from his novel is featured in Evergreen Review. Originally from Turkey and France, he’s also lived in Maputo, Mozambique, where he taught English in 2014. He is currently a Bridge editor and events assistant at Brooklyn Poets, and teaches creative writing to English language learners at the Brooklyn Public Library.