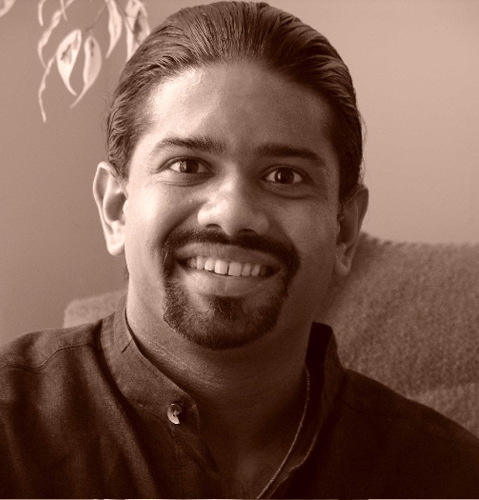 On graduation day, my Father posed in his first car,
a machine of possibility bought
for fifty bucks. America was horsepower
and torque, shark fins, power lines
stretching to the horizon and no—hell no—
no speed limit on Montana roads.

Of the long unwinding quiet of asphalt,
the mute Morse code of the road,
the dead silence after a snowfall—
of these things he never spoke.
America was peanut butter and potato chip
sandwiches, rice with Campbell’s cream
of mushroom soup, weeping
in the bathroom where none could hear.

Vikas K. Menon is a poet, playwright and songwriter. His poems have been featured in numerous publications, including Indivisible: An Anthology of South Asian American Poetry and The HarperCollins Book of English Poetry. He is co-writer of the augmented reality comic book, Priya’s Shakti ( www.priyashakti.com), which was awarded a 2014 Tribeca Film Institute New Media Fund grant and support from the Ford Foundation. His plays have received readings at or been produced by Pratidhwani Theatre, Ruffled Feathers Theater Company, Ingenue Theatre and the Classical Theatre of Harlem. He was a Keynote Speaker at Canto Mundo 2011 and is a board member of Kundiman, the first organization of its kind dedicated to supporting Asian-American poetry. He received his M.F.A (Poetry) from Brooklyn College and his M.A. in Literature from St. Louis University.