The wonderful summer interns of Poets House share their favorites from the 2019 Poets House Showcase, our annual exhibition of over 3,000 poetry books published in the past 18 months, on view through August 17! 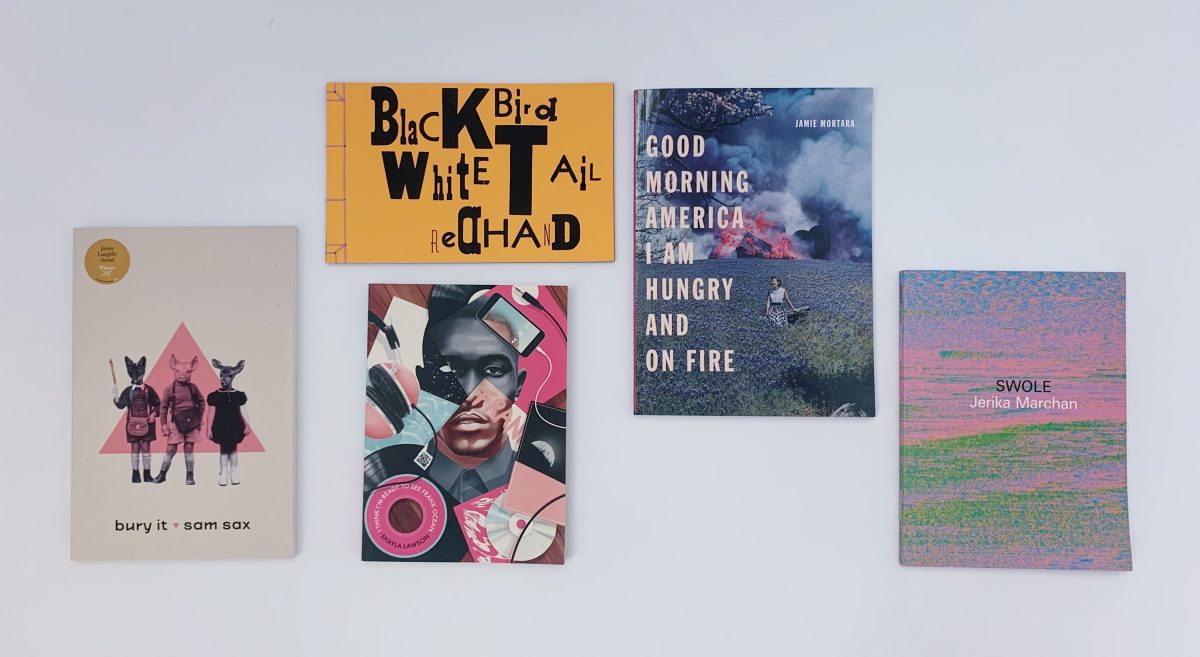 This hand-bound chapbook reminds us of the labor of self-making, as well as the violence of being forcibly unmade by another. It depicts a portrait of “a girl”; “the girl with no hands”; “girl with cloven feet”; “a hooved girl”; “girl who gave birth to an apple” as she transforms herself and is violently transformed by her father, lumberjacks, and a man who “will cut out her heart, / transplant an apple.” Ultimately, we must wonder if she is not the subject of one portrait, but the many faces of many girls who are told to be other than they are. This brief chapbook leaves us with plenty to chew on.

sam sax’s bury it opens with poems inspired by the suicides of young gay people in 2010 and moves through various poems concerned at once with violence and grief in its relationship to queerness. The poems remain alluring despite their heavy subject matter because of sax’s personal touch, intricate poetry, and the humanity he creates a space for within the lines.

Shayla Lawson brings new meaning to the lyric form with this collection of poetry inspired by the music of Frank Ocean. Her poetry hums along with the rhythms of his music, moving from shorter works that directly quote his songs to longer, more meditative poems about what it means to “wait.” Lawson’s poems are like the ocean itself: restless and beautiful.

Mortara’s unflinching exploration and critique of toxic masculinity grip the reader as each poem unfolds. The reader cannot help but feel sympathetic for the speaker who fights for their very existence and ultimately “refuse[s] / to drown.”

Form follows function in SWOLE, an undulating collection that encapsulates the destructive and powerful forces of Katrina’s flooding, and the toll of such destruction on the architecture of a city and the human body. 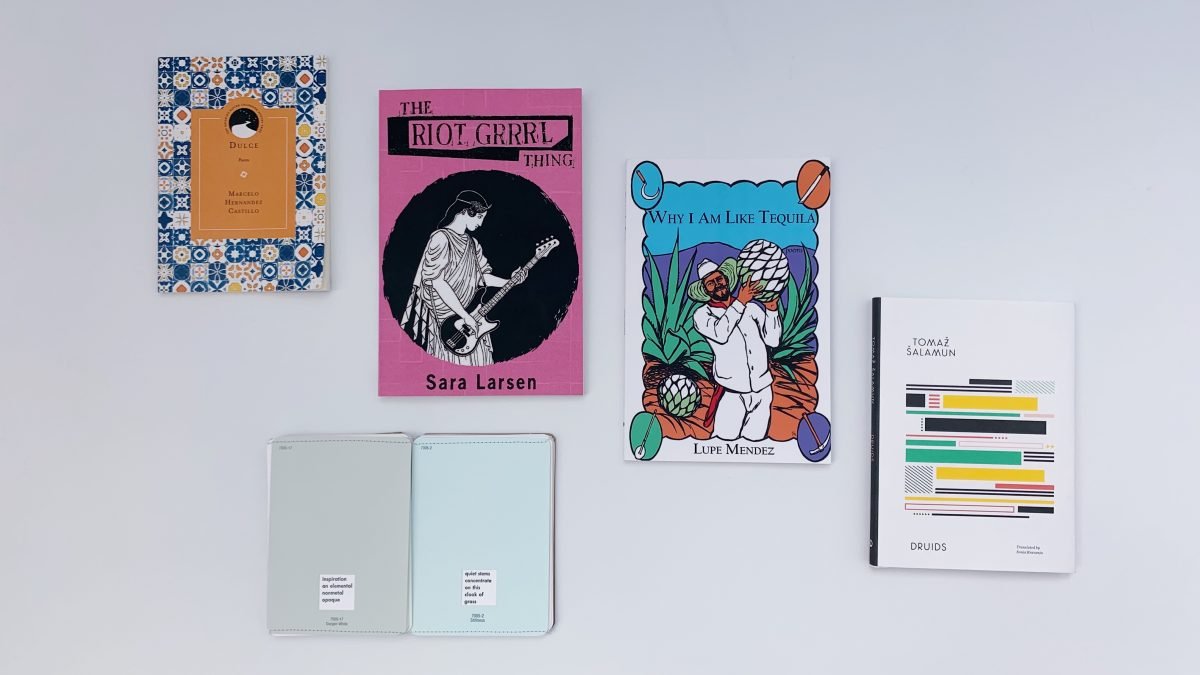 I first picked up this book because of its colorful tile-patterned cover. Dulce is a moving exploration/confession of relationships and intimacy, abounding with rich and vivid description.

This lovely, delicate artist’s book inventively combines poetry with visual art. Each page is made from a paint color sample, each marked by the manufacturer with inventive names that encompass the feeling and tone of the color,  like “Stillness,” “Summer Eclipse,” and “Tsunami Sky,” juxtaposed with five- or six-digit numbers that clearly define the hue and saturation of the palette. Reszies uses these paint samples both as medium and inspiration. On each page, she writes short poems for the titular “Current Mood.” The few words of each poem paint a text-based picture in the pages of color.

Sara Larsen’s The Riot Grrrl Thing grabs the reader by the ear, shoves it close to a Marshall amp, and turns the volume all the way up on outrage, confusion, power, sex, and the unflinching nature of what it means to be a Riot Grrrl. Larsen’s poetic punk text screams on stage and head-bangs along to women revolting against a world filled with constraint. The wild syntax and spacing of the book invite the reader to dance along, rage, and ultimately find a place where each reader can answer for themselves “how do I fight / for my joy.” Totally bad-assed and absolutely freeing to read.

I was born in Mexico and raised in the United States, and Why I Am Like Tequila includes pieces that voice both Mexico and the United States. I recommend this book in which Mendez plays with both language and memory as he eloquently toys with the concepts of border spaces and family history.

I’m particularly interested in this book because of the way the translator’s preface describes a poetry festival, “where the air was dense with poetry spoken in many languages and yet understood by all.” It’s interesting to me that a translated book of poetry can still maintain such control of language to masterfully convey a message, an emotion, a moment, as with the line “the high-tide is spreading onto the reefs of sunny days.” Seeing as I can’t understand the original language, the translation still provides this rich image to digest.