The Practice of Poetry: Writing Poems of Place with KC Trommer

Last week as I walked through the West Village with a friend, I noticed the changing facades of a first, second, third, and then a fourth place I had known and loved, each of which was either vacant or in the process of being replaced and overwritten. “Also, Cornelia Street Cafe!” I said to my friend, gesturing, exasperated, at the now-empty storefront that had been a watering hole for writers and artists for over four decades. “Every place I know is going!” “That just means you’re a New Yorker,” said my friend.

Her comment reminded me of Colson Whitehead’s 9/11 essay, “The Way We Live Now: 11-11-01; Lost and Found,” when he writes, “You are a New Yorker when what was there before is more real and solid than what is here now.” It wasn’t so much that I had been a regular to Cornelia Street’s narrow lower-level reading stage so much as I took for granted that it was a known place that would always be there. And of course it was until it wasn’t. On our walk, I was a few days away from teaching a one-day workshop at Poets House about poems of place, so I felt even more conscious than usual about the world around me and the organic qualities of both what I see and what I keep alive in my imagination.

Poems of place contain the psychological and geographic maps we make of the worlds we know, think we know, and those we remember. While there are many types of poems of this kind, they generally fall into a few broad categories: the poems of the known—home, the familiar; poems of travel and of travelers; and poems of the displaced or of displacement. Using tools available to playwrights and fiction writers, poets use scene-setting in poems in order to try and nail down an image or idea of home and to name it and therefore, in some way, to claim it. At other times, the impulse is to document the interaction with a new place and to create poems of novelty and to describe things the speaker sees for the first time. There is also the instinct to identify a place as a source of longing, which is often the result of a rupture.

In each instance, poems of place inevitably deal with time. In the case of nostalgia, or longing for a place that only exists in one’s mind or which is otherwise inaccessible, a poet may create a poem that attempts to capture the remembered place and its significance. This is the case in “Postcard from Kashmir,” a short lyric by Agha Shahid Ali that presents an ache for Kashmir, the place where he came of age and which he never lived in again once he settled in the United States. With this workshop in mind and Kashmir in the news because the Indian Parliament stripped the region of its autonomy in August 2019, this poem seemed like a natural one to return to at this moment.

Kashmir shrinks into my mailbox,
my home a neat four by six inches.

I always loved neatness. Now I hold
the half-inch Himalayas in my hand.

This is home. And this the closest
I’ll ever be to home. When I return,
the colors won’t be so brilliant,
the Jhelum’s waters so clean,
so ultramarine. My love
so overexposed.

And my memory will be a little
out of focus, in it
a giant negative, black
and white, still undeveloped.

Here is a poem of longing in which the speaker knows that the memory of his home country remains “still undeveloped” and “a little / out of focus,” as if the memory itself always sits in the darkroom’s chemical bath, waiting to emerge and be fully seen. I love this poem for so many reasons but especially for how, in such an economical space, Ali conjures his loss and shows the failure of an image to contain the true beauty and import of a place that the speaker has loved and lost. There’s also the ekphrastic impulse to recreate the postcard’s image for the reader and to show how the desire for neatness and simplicity runs counter to the complexity of the place the image depicts and the feelings it brings out in the speaker.

For our in-class writing exercise, I asked students to bring in an image of a place of significance to them. Keeping Ali’s “overexposed” love for home in mind, I gave them five minutes and I asked them to ask the image they had on hand 40 questions, an absurd number. The idea behind this was to have students, under the pressure of the stopwatch, look at an image and to interrogate it, asking the questions that occur only once the obvious ones—Who is taking the picture? What is outside the frame of the picture that we can’t see? What year is it? What is happening?—have been asked. Beyond those easy questions, we find our thinking. A poem could be created from this exercise by selecting the five best questions from this list and writing answers to them, placing the answers in order of least to most obvious and seeing if a poem emerges.

This exercise could be done quickly with as few as 30 questions. Below are 30 that I came up with, based on an image like one that Ali might have seen. 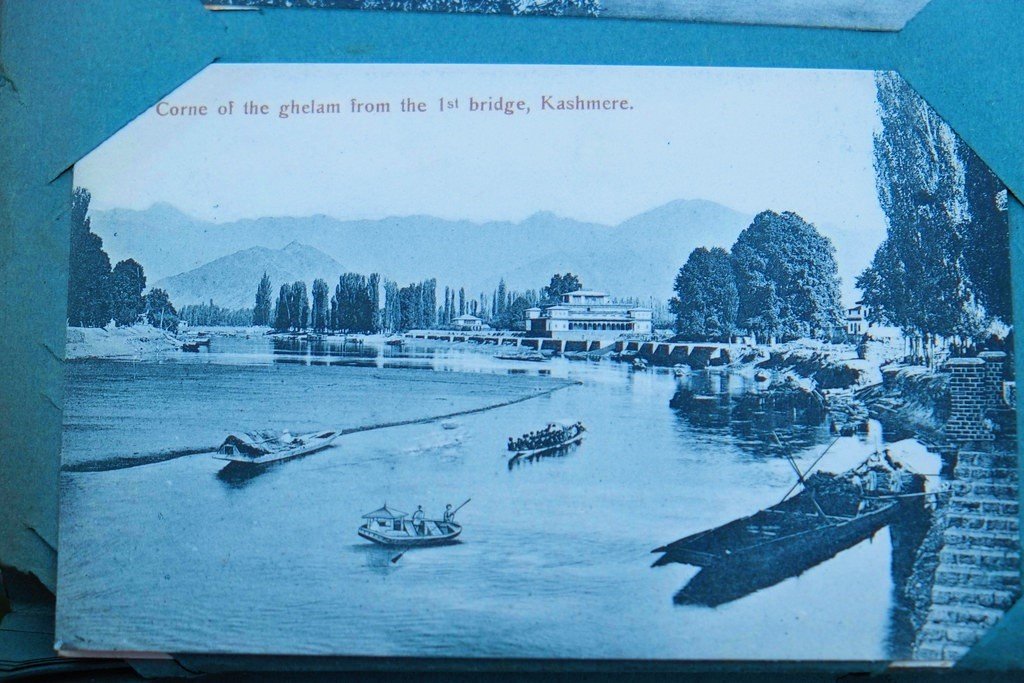 Where else have I seen that is this shade of blue? Is the blue in the image the blue that you see when you stand on the banks of the river? If it’s a different blue, how is it different from the one I see in the image? What is this waterway for? When the snow melts on the mountains in the distance, does the water from these mountains feed the river? Who uses it and where does it take them? Is there someone who has lived here her whole life? If so, how has she seen the river change over time? Is it a place of safety or danger, of comfort or indifference? For whom? Do you eat from this river or swim here and if you swim here, what are the currents like? Are there places on the river where you can be idle, or does it race along? If a boat is moving along the river and you are in one of the boats, what greeting do you exchange with the person in another boat? Do you smile at one another? Do you say something unusual? Is there time for a conversation between you? What are the boats carrying and to where? Is this a river that is named in stories? Is there a border this river makes? What is the difference between one side and the other? Is there a difference? Does there have to be? Are these boats traveling in one direction? Why is this the place that the photographer stood to take the photograph? Was this the easiest spot to get to? If the photographer walked to the spot, did he ask someone for advice on where to take the photograph? If he chose the spot himself, was there someone he had in mind to show it to? Who was the person he hoped would admire it and what did they say when they saw it? Who lives in the building at the bend in the river? What do they hear from inside the building? Do they see the photographer with his camera?

In writing a poem of place, we may want to say: I know this place. It’s mine. This place is new but I see it clearly. Or, I knew this place, it was once mine. In truth, places change—sometimes nearly imperceptibly, sometimes dramatically—as do our memories and perceptions. Sometimes, places like Cornelia Street Cafe vanish. Sometimes homelands fade in your consciousness, as Kashmir does for Ali, despite his writing about it often and trying to keep the memory of it crisp and alive in his verse. If a poem is to contain a place, it must recognize this fragility. When thinking about a known place, or a new place, or a place we have left or have had to leave, we need to consider all that we don’t know about it. In doing so, we find our way.

KC Trommer is the author of We Call Them Beautiful (2019) and the chapbook The Hasp Tongue (2014). Her poems have appeared in AGNI, The Antioch Review, Blackbird, The Common, Diode, LitHub, The Sycamore Review, Poetry Daily, Prairie Schooner, and Poetry East, as well as in several anthologies. Her essays have appeared in VIDA Review, LitHub, and elsewhere. She has been awarded grants and fellowships from the Queens Council on the Arts, the Table 4 Writers Foundation, the Center for Book Arts, the Vermont Studio Center, the Haystack Mountain School of Crafts, and the Prague Summer Program. She has taught writing at the University of Michigan, Ann Arbor; Bard High School Early College, Queens; and the University of Pennsylvania.